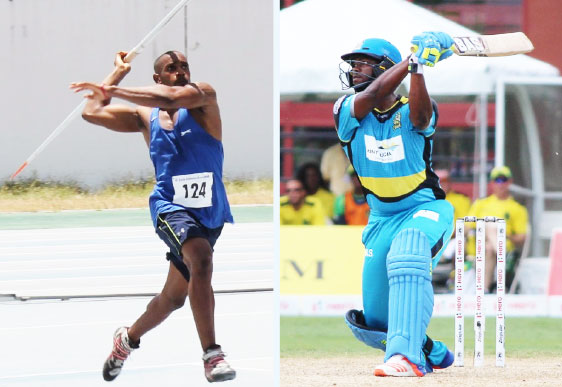 THE 39th edition of the National Sports Awards gala evening ceremony is scheduled for Saturday, February 17 at the Royalton St. Lucia Resort & Spa.

Recently, the Department of Youth Development and Sports officially announced the shortlisted nominees for Junior and Senior Sportsman and Sportswoman of the Year 2017 as they continue to iron out plans for honouring the island leading athletes.

Acting Director of Sports, Patrick Mathurin, and Ryan O’ Brian from the Department’s Communications Unit were on hand at the brief presentation in the Youth Development and Sports conference room.

In his preamble, Mathurin praised those Associations which not only met the deadline, but were also able to meet the requirement in terms of nominees submitted and revealed the names of most of the individuals shortlisted for the prestigious individual awards, the Sportsman and Sportswoman of the Year, Junior and Senior.

To this end, the Department pledged its commitment to assist those Associations in capacity building.

In terms of the shortlisting of nominees, the in-house selection committee was disappointed with the substance and quality of nominees and, as a result, was unable to justify the meeting of the full quota except in the junior category.

In order to qualify for the shortlist, nominees must have met the deadline and, in addition information submitted on them, must be of a high quality. Between fourteen and sixteen nominees normally make the shortlist; however, the committee could only come up with twelve this time around.

Based on the selection committee, the four nominees from track and field all made their respective grades: Julien Alfred is nominated for both junior and senior; she captured gold at the Commonwealth Youth Games in the Bahamas. Also nominated are Ruben Nichols (junior) and Albert Reynolds (senior).

This time around, there is no Levern Spencer in the mix for athletics.

Female cricketer Qiana Joseph, who recently captured the top honors for Junior/Senior Cricketer of the Year at the Saint Lucia National Cricket Association Awards night, represented the West Indies at the ICC Women’s 50 overs in England. Megan Nestor represented Saint Lucia at the Windward Islands Schools Games and was a member of Saint Lucia Under-23 Netball Team which participated at the OECS/ECCB Championship. The two athletes will join Alfred in battle for the junior sportswoman of the year award.

Even more interesting, Alfred is also a nominee for the Senior Sportswoman of the Year title, with the other athlete in contention being Katie Klye, who has had a phenomenal year in the pool. Kyle is also the reigning Junior Sportswoman of the Year and is currently studying in the United Kingdom. She recently received a FINA scholarship to continue her training as she keeps a close eye on the Tokyo 2020 Summer Olympic Games.

For the Junior Sportsman, West Indies Under-19 opening batsman Kimani Melius seems well set to capture his first major award at that level, but will have to deal with Nathan Ferrari (boxing), who won gold at OECS and silver at Caribbean Developmental Championship, and Ruben Nichols (athletics), who won 8 gold, 3 silver and 2 bronze medals, and represented Saint Lucia at the Windward Islands School Games and the IAAF Junior World Championships.

This is likely to be Reynolds’, who reset not only the national record, but the OECS mark as well with a javelin throw of 79.44 metres. Reynolds picked up 5 gold, 1 silver and 1 bronze medals during 2017 and is currently ranked 67th on the IAAF list and 3rd-ranked Caribbean javelin thrower on the world list and has qualified for the Commonwealth Gold Coast Games in Australia.

The Senior Sportswoman of the Year and the Junior Sportsman of the Year could be the most interesting on the night. The Senior Sportswoman award will be decided between two class athletes: record-breaking swimmer Katie Kyle, who has multiple local and regional honours, and Julien Alfred, who has claimed bragging rights for being the fastest junior athlete in the Commonwealth. Meanwhile, Kimani Melius would have settled things out with Ruben Nichols, as the junior category seems headed for a tie, which has only happened once in the history of the awards.