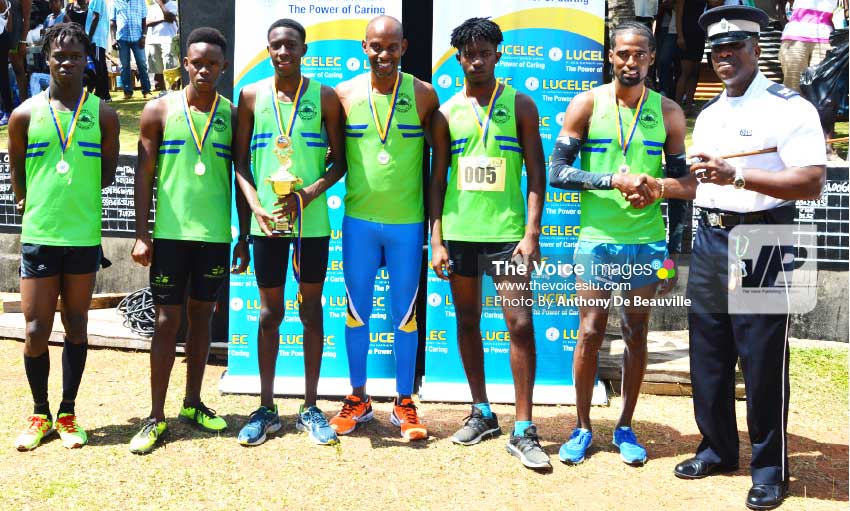 THE Mon Repos Youth and Sports Council staged the 30th edition of its most-talked-about event on its calendar, the “Mon Repos Road Relay”, from the intersection of Praslin and Fox Grove Inn.

The event, like in previous years, drew large crowds of onlookers and supporters along the route as the runners made their way through the various communities, then back on the Vieux Fort Highway, Micoud Village and environs, to the Canelles Bridge and back to finish on the Patience playing field.

There was about a one-hour start delay due to late registration as teams were arriving late and when the final count was made, there were six male and one female team at the starting line — the worst ever in the history of the event.

Road Busters Club from Castries dominated from start to finish and never for once were they really challenged as national athlete Michael Biscette started things off for them with a bang while season campaigner Jason Sayers — no stranger to this event — finished things off in grand style six minutes ahead of his closest rival from Grass Roots Club out of Mon Repos to win the $2000 at stake and the championship trophy and gold medal.

With no French team in this year’s event, the former champions coached by John Gaston finished in a time of 1 hour, 40 minutes and 15 seconds; second place — Grass Street in 1 hour, 46 minutes, also picked up the awards for the first community team and affiliated member.

Head coach of Road Busters Club said, “I am pretty satisfied with the overall performance of my team members. We didn’t get the level of competition like previous years, but nonetheless the morning was good. The only disappointment is that our ladies did not take part because we were told that they will be competing in an Open Category, so we decided to let them take the weekend off and focus on the Independence Games this weekend at the George Odlum Stadium.”

Following the event, there were a number of fun sports, including 60-metres, 80-metres, high jump and hurdles.