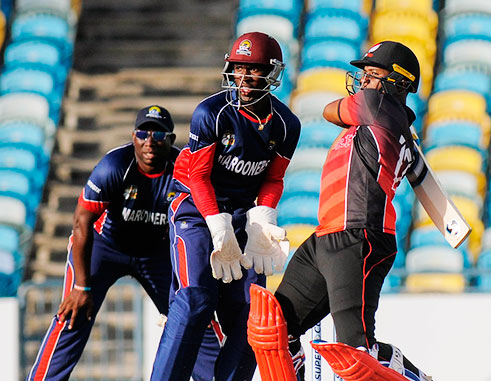 IT was carded as a day/night affair but Trinidad and Tobago required less than three hours to dispose of a listless Combined Campuses and Colleges Marooners by nine wickets in their second match of the Regional Super50 on Thursday.

Off-spinner Sunil Narine was brilliant, claiming five for 10 from 7.4 overs to sink Marooners for 101 off 25.4 overs after the Barbados-based unit opted to bat first at historic Kensington Oval.

Veteran left-hander Ryan Hinds top-scored with a stroke-filled 32 from 19 balls but was just one of two batsmen to reach double figures, as Marooners went from dominant in their opening win against Windward Islands Volcanoes to dreadful — all in the space of three days.

West Indies opener Evin Lewis then added to the Marooners’ woes, blasting a breathtaking unbeaten 70 from just 42 balls, as Red Force raced to their paltry target in the 12th over. The aggressive left-hander showed little mercy, smashing nine fours and four sixes as he raced to his half-century off 28 balls.

Asked to chase an uncomplicated 228 at 3Ws Oval, Pride overcame a stuttering start to reach their target in the 47th over, and follow up their convincing win over Trinidad and Tobago Red Force on Tuesday’s opening day.

Left-hander Jonathan Carter, adjudged Man-of-the-Match, was at the forefront of the run chase, stroking a classy unbeaten 92 while Chase was also in fine nick with an unbeaten 87 off 93 balls with seven fours and two sixes.

The pair put on 168 in an unbroken fourth wicket stand which pulled Pride around for the discomfort of 63 for three in the 16th over.

Sent in earlier, Hampshire rallied from 29 for three in the 14th over to reach 227 for seven off their 50 overs, with Zimbabwean Sean Ervine top-scoring with 63, Joe Weatherley getting 51 added 112 for the fourth wicket and Lewis McManus, 47.

Meanwhile, spin twins VeerasammyPermaul and DevendraBishoo wrecked English County Kent to propel Guyana Jaguars to a comfortable 35-run victory in their opening Group B match of the Regional Super50 on Wednesday.

Defending a seemingly inadequate 233 at the Vivian Richards Cricket Ground, Jaguars appeared en route to defeat with Kent cruising on 119 for one in the 28th over.

But Permaul snatched four for 46 and leg-spinner Bishoo, three for 34, to scythe through the innings and send Kent crashing for 198 all out in the 47th over.

Zak Crawley top-scored with 60 while Sean Dickson got 29 and Daniel Bell-Drummond, 28, but the remainder of the batting failed to come to terms with the Jaguars attack.

Veteran former West Indies star, Shiv Chanderpaul, stroked 67 at the top of the order and got support from wicketkeeper Anthony Bramble who made 39, as Jaguars were bowled out for 233 off 49 overs.

Fast bowler Mitchell Claydon was the best bowler with five for 31 while fellow seamer Will Gidman 2 for 37 and off-spinner Ian Thomas 2 for 62 claimed two wickets apiece.

Also on Wednesday, Rahkeem Cornwall slammed an imperious unbeaten hundred as Leeward Islands Hurricanes demolished United States by 162 runs in their opening match. In the day/night contest at Coolidge Cricket Ground, Hurricanes raced to 298 for eight off their 50 overs, with Cornwall marching to 132 off 92 balls, which included eight fours and nine sixes, to mark a career-best second regional one-day hundred.

United States were never in the hunt and collapsed to 136 in the 39th over, as left-arm spinner AkealHosein claimed five for 26 while Cornwall returned with his off-spin to pick up three for 27 and complete a fine all-round performance.

Captain Kieran Powell (4) and Windies star Marlon Samuels (5) both fell cheaply inside the first nine overs to leave the hosts stuttering on 27 for two before opener Montcin Hodge 58 from 82 balls, struck six fours and a six and Devon Thomas 32 with three fours and a six in a 37-ball knock, the pair added 72 for the third wicket to repair the damage.

Left-arm pacer Elmore Hutchinson was the best bowler with three for 44 while fellow left-armer Saurabh Netravalkar 2 for 45 and leg-spinner Timil Patel 2 for 76 picked up two wickets apiece.

Matches continue today in Barbados, in Group A, with Trinidad and Tobago Red Force versus Hampshire at 9:00 a.m. and Barbados Pride versus Windward Islands Volcanoes at 2:00 p.m.

Tomorrow, in Antigua, in Group B, it’s Jamaica Scorpions versus Kent at 9:00 a.m. and Leeward Islands Hurricane versus Guyana Jaguars at 2:00 p.m.

On Monday, in Barbados, in Group A, it’s Trinidad and Tobago Red Force versus Windward Islands Volcanoes at 9:00 a.m. and Combined Campuses and Colleges versus Hampshire at 2:00 p.m.