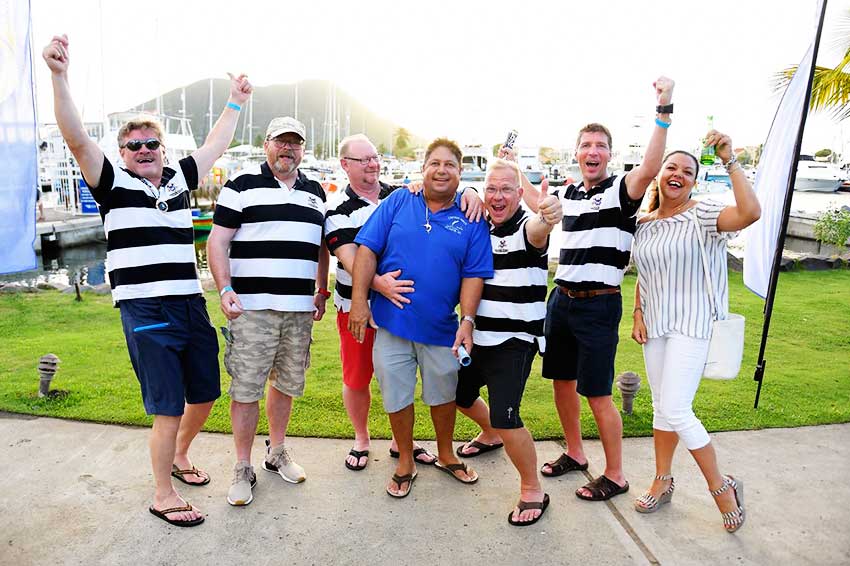 The Saint Lucia Game Fishing Association (SLGFA) hosted the island’s twenty-sixth annual International Billfish Tournament from November 7 – 11, 2017, and participating anglers agreed they saw some of the best conditions in years. Almost half of this year’s sixteen boats came from Trinidad, with other entrants from Grenada, Barbados, Martinique, England and two teams from Saint Lucia.

Some of the region’s most experienced skippers and anglers came to compete for glory and a 2017 Suzuki Jimny, sponsored by JQ Charles Motors, for the team bringing home a record-breaking blue marlin. After three days of hard-fought competition, first place went to Vesper from Trinidad & Tobago, skippered by Adrian DeSilva; they released a total of six blue marlins and won automatic entry into the 2018 Offshore World Championships in Costa Rica.

For the first time, a team from Finland competed in the Saint Lucia Billfish Tournament, chartering one of the island’s veteran skippers, Bruce Hackshaw of Captain Mikes, and his boat, Lucky Strike. The Finns put in an energetic and enthusiastic performance throughout the event, including the longest fight as they wrestled a very big marlin for almost three hours before releasing it after darkness had fallen and the rest of the boats were back on the dock.

As a spectator sport, fishing for marlin poses some challenges, because all the action takes place at sea, in deep waters sometimes miles off the island’s coast. But back on land, the four-day event is a spectacular sight at IGY Rodney Bay Marina’s G-Dock, as one after another sport-fishing motor yacht line up with various heights of vertigo-inducing towers and a vast array of competitive fishing equipment.

On the first day, as the horn blew for the 6:30 a.m. bimini start in the waters off Rodney Bay, as if launched out of an invisible cannon, sixteen boats dispersed to various points north into the Martinique Channel and the well-known fishing area known as “Grand Sec”, and south towards the deep waters between Saint Lucia and Saint Vincent. For the three days of competition, Fish Control, whose job it is to record all the details of the action on the water, was located at Rodney Bay and kept busy with a regular stream of calls to report “strike – hooked up and fighting!”

That’s the moment every game angler hopes for, whether in a tournament or on a day charter in the Caribbean any time of the year. When a line tightens and a reel cracks with the power of a marlin’s bill snapping down on a fancy-dancing lure, the fight begins between man and marine force of nature. It can take minutes or hours to catch and release a big fish, and although the ultimate dream may be to land a 500-pounder and haul it back to the weigh station to be hung by the tail and admired by the land-based onlookers, that type of showstopper is increasingly difficult to find in tournaments across the region.

These days, sport-fishing has its passion in conservation, and experienced anglers become hooked on the adrenaline rush of winning another battle against another fish. Points are scored by reeling in the prize close enough to the boat to look it in the eye, then swiftly letting it go to enjoy the added rush of watching one of the ocean’s most magnificent creatures leap away and swim off into the distance. Even with generous cash prizes, more fishing gear and a few bottles of the island’s best grog for the winners, it’s more about the fishing than the winning, and it’s always about the next big fish.

Sport- or bill-fishing is a multi-million-dollar tourism product which continues to grow globally, in good part because of the sustainable strategies applied by its governing bodies and “green-minded” practitioners over the past decade. According to Billfish.Org, “In Costa Rica, sport-fishing and fishing tourism accounts for more than US$400 million annually. In adjacent Panama, sport-fishing tourism generates more than US$170 million annually.”

The Billfish Foundation has completed groundbreaking studies in the Los Cabos region of Mexico, as well as Costa Rica and Panama, which demonstrate the ability of catch and release bill-fishing to provide thousands of jobs, support tax bases, and provide a foundation for broader conservation. As the waters around the Caribbean become stretched by over-fishing and increasing tourism arrivals, anglers and charter company owners agree that a sustainable approach is needed to manage long-term impact on the marine environment and its associated livelihoods.

The International Game Fishing Association, a non-profit organisation responsible for promoting ethical angling practices and creating regulations for competitions and tournaments, is currently conducting a survey to help determine the value of recreational bill-fishing in the Caribbean. The results, they say, will help conserve blue marlin, white marlin, sailfish and spearfish, which augur well for stakeholders around the region.

Back in Saint Lucia, President of the SLGFA, Sean Devaux, reported a successful 2017 Billfish Tournament and had assurances from many of the competitors that they will return next year. At the Saturday evening prize-giving, he thanked the many sponsors and volunteers that made the event possible and promised that the association is looking forward to an even bigger and better event in 2018.