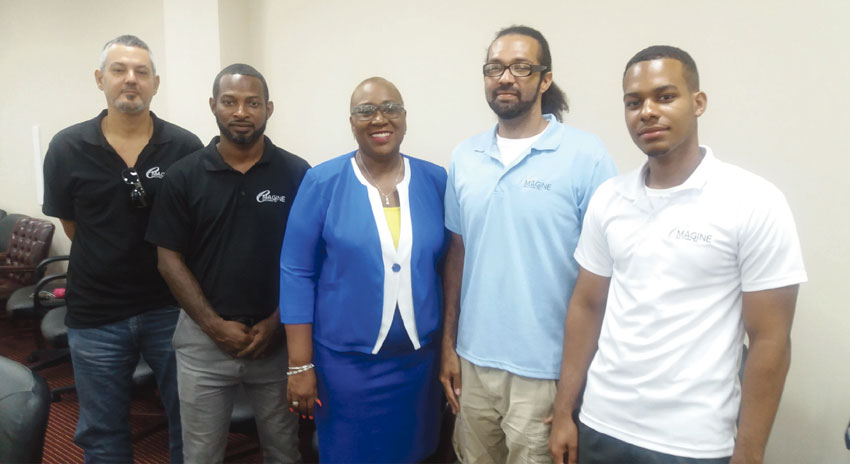 A St. Lucian website development firm has beaten the competition from other regional territories to become the creators of the new Eastern Caribbean Central Banking (ECCB) website.

The revelation was made at the launch of the website at the ECCB branch at the Financial Centre in Pointe Seraphine on Wednesday morning.

Present at the launch were members of the firm, eMagine Solutions Inc, as well as Sheran Ferdinand, Resident Representative of ECCB in St. Lucia.

The event formed part of an online conference with members of the ECCB from across the ECCU, including ECCB Governor, Timothy Antoine.

Managing Director of eMagine Solutions Inc., Ian Mitchell said: “We are very happy to have been the team selected (and) very proud to have been from right here in St. Lucia to have made these things happen. It also shows that the skills are available within our region.”

He said eMagine was contracted to design and develop the new website application for the ECCB after they were interviewed and submitted a proposal.

Mitchell said: “We primarily had the responsibility of guiding and educating the members of the ECCB website team about the role that they need to play in a project such as this, in addition to providing our expertise in design and development.”

The features that the ECCB was particularly interested in, he said, had a lot to do with the statistics module, as well as the various communication tools, that they would have with members of the public and others within the ECCU, such as the discussion forums.

In the end, it seemed that the module was very impressive and met the high expectations of the statistics department.

Mitchell said feedback and support is a major focal point as this is the way in which the site is expected to continuously improve to meet the expectations of those using it.

Development of the site took about seven months and was created by a team of eight from his company, as well as members of the ECCB Website Team, with countless hours and effort.

“This is the result of a truly collaborative effort,” Mitchell said.

He continued: “A lot of clients don’t really realise this when they get started, that they have a huge part to play in helping to make these things happen. We are the developers, but they are the experts in their particular fields. So they are the ones who need to give us the feedback, direction, content and information to make sure things work the way they should be.”

He said this is not their first time doing regional work, but that this was a very large project for them.

Echoing his sentiments, Ferdinand said she was excited about the launch, as the previous website was put to rest based on suggestions that the site was not up to par.
The old website, she said, was not as user friendly as it should have been, which prompted Governor Antoine to step in and call for a change.

She said that with the launch of such an important tool, it was important to gather members of the media from the respective islands to experience the new site, as well as to spread the news and inform the masses on the new developments

There are plans for a mobile phone application as part of the project, with the website being the first phase.
The site is now available for public usage at www.eccb-centralbank.org