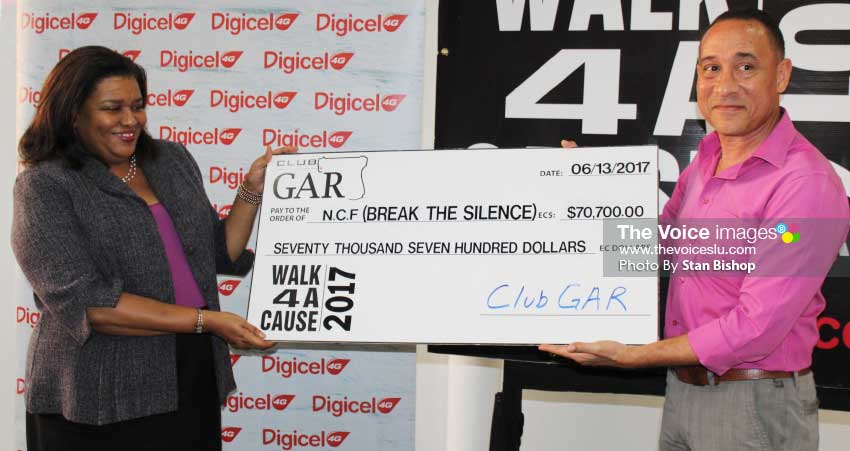 WITH many families facing the devastating effects of domestic violence daily, the recent investment of funds by shooting club, Club Gar, to fight the scourge has received many blessings.

Last week, the Club’s president, Gordon Charles, presented a cheque for $70,700 to Director of Gender relations, Charms Gaspard, during a short ceremony at the Audi Showroom at Choc.

The funds will go towards the “Break The Silence” campaign and administered by the National Community Foundation (NCF).

The funds were raised during the Club’s May 28 Walk 4 A Cause, its fourth in as many years, which Club member, Anthony Bristol, described as “a huge success”. Over the past four years, the Club has championed other social causes by raising funds for other organizations.

“The walk’s objectives for this year were to really reach out and spread the word about an issue that is of great social concern,” Bristol said.

Through an increased use of social media to spread that message, he said the club was able to sell more packages for the walk and raise more money than was raised for the previous walks. The response from corporate sponsors, he said, was unprecedentedly overwhelming.

Besides raising funds for the cause, Bristol said the Club will also for the next twelve months continue to spread the message regarding the scourge of domestic violence, which often results in the loss of productivity and – worse – lives.

To that end, the Club will hire a professional on the subject, as well as notable personalities to create the awareness that domestic violence should not be encouraged. Those personalities include Ronald “Boo” Hinkson.

Gaspard said she was “heartened” that a club primarily made up of young men recognized that domestic violence was a major issue that needed to be addressed and tackled. Domestic violence, she said, “is the basis of all the problems that we have in society.”

“It stems from the home and if you don’t have a stable home and foundation, then you cannot go out there and be productive as a child let alone an adult,” she said.

She applauded Club members, adding that the fact that men, who traditionally are part of the problem, were becoming part of the solution.

“(They’re showing that they) want to do something to change the concept by wanting to talk to men like themselves and recognizing that there’s a major problem that needs to be addressed and willing to make such a huge effort to address it,” Gaspard said.

Gaspard said that once the clear message about domestic violence and its attendant effects got out and people know where they can get help, that itself was an achievement. She said there needs to be a culture where violence was not the norm.

“Our experience with our 202 hotline is that people call for anything once there is a problem. So as we begin to raise the profile and awareness, we feel that there are a number of new problems emerging every day,” she explained.

Charles said that while the Club’s primary objective is to provide a recreational ambience for its members, taking up various societal causes over the past few years has been to demonstrate that it can make a positive impact in the community.

“This is done purely through the good giving by our members. Not one cent goes back to Club Gar,” he said.

Since the year began, scores of incidents of domestic violence have made the news, some resulting in death. Many local groups, such as Speak Out Saint Lucia, have been clamouring for more to be done to protect the family from domestic violence. Sergeant Wilson of the Royal Saint Lucia Police Force, praised the Club for assisting in that regard.

“(The Force) has been on board with organizers from day one. We indicated that we will support the drive and work with Club Gar to raise the much-needed awareness about domestic violence,” she said.