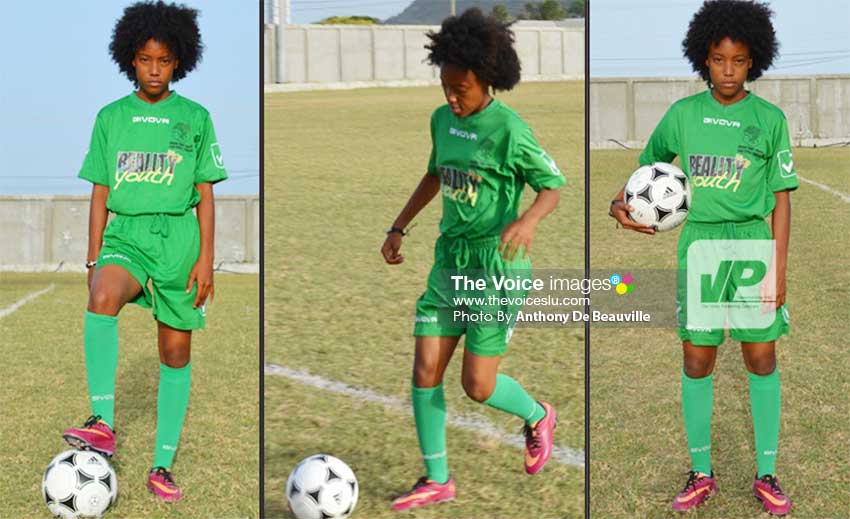 YOUTH footballer Krysan St. Louis is a Form Two student at Vieux Fort Comprehensive Secondary School. Her favourite subjects are Mathematics and Business Studies because her goal is to become a certified accountant.

This past weekend, St. Louis took time out to speak to The VOICE about her football prowess, playing for Victory Eagle. The 14-year-old striker is under the watchful eyes of coaches Denroy Mathurin, Emmanuel Belasse, Titus Elva and Allwyn Harris.

The VOICE: At what age did you start playing the game of football?

St. Louis: I started playing at the age of four. My brother Trystan has a passion for football and since he had two sisters, he would engage us to play with him at every opportunity. This stayed with me and I developed a love for the sport.

The VOICE: Who encouraged you to play?

St. Louis: My mother, father, brother, teachers, my pastor and my coaches encouraged me to play.

The VOICE: Do your parents encourage you by supporting you at the various football championships?

St. Louis: Yes. Both my parents encourage me, but my mom makes sure she is at all my games.

The VOICE: Is anyone in your family involved in football or any other sport?

St. Louis: My brother and my twin sister both play football.

The VOICE: What other sports have you participated in before football, and why the switch?

St. Louis: I have participated in cricket and track and field, but my true love is football.

The VOICE: What is your biggest accomplishment in your sports?

St. Louis: Representing my country Saint Lucia in a CONCACAF Girls Under-15 tournament as a striker.

The VOICE: Who are your favourite local, regional and international footballers, and why?

St. Louis: My favourite footballer locally would be my brother Trystan who plays for Vieux Fort South. Internationally, it would be Cristiano Ronaldo. I admire his self-confidence and his superior football skills.

St. Louis: My sports hero is Cristiano. I admire the fact that he started so young and has continued excelling over the years.

The VOICE: How many times have you represented your school?

St. Louis: I first represented my school at the primary level for three years until I went to secondary school where I am currently representing VFCSS.

The VOICE: How were your performances?

St. Louis: My performances were good, but I could have done better at primary school. At secondary school I played briefly last year. However; this year we came second and I attained best striker for the secondary schools competition 2017.

VOICE: How many trophies have you won to date for your school and club?

The VOICE: What are your expectations in the upcoming SLFA women’s tournament?

St. Louis: My expectation is to reclaim my title as MVP, scoring the most goals and ultimately win with my team Vieux Fort South in the SLFA Under-16 tournament.

The VOICE: How far would you like to go in representing your school and Saint Lucia?

St. Louis: I would like to play worldwide wherever the opportunity lies.

St. Louis: The keys to my success are praying, training, hard work, discipline, dedication and, of course, the love for the game.

St. Louis: I get my inspiration from my brother who strives for what he wants by giving it his all. Also, my favourite team Manchester United really inspires me to try to better myself in my sport.

The VOICE: What is your favourite meal/drink?

St. Louis: In my spare time, I play FIFA games with friends, ride my bike and play small goal football with the boys.

St. Louis: My motto is “I can do all things through Christ who strengthens me”.

The VOICE: What words of advice or encouragement do you have to share with young footballers at your school and club?

St. Louis: I would like to say that football is played on the day and no matter how big or small you are, you can do it. Never give up