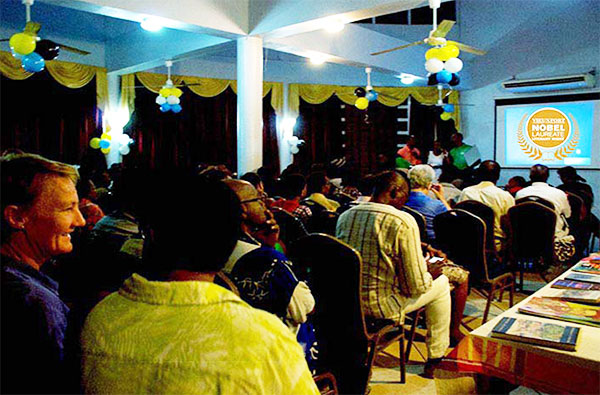 The event will feature poetry, dance, fashion, drama, storytelling, folk drumming, community art collage, a video on the growing body of Vieux Fort literature, a display of literature and master pieces of arts and crafts by writers and artists from the South, and excerpts of poetry, music, and Vieux Fort landscape videos. And as a special treat, and in keeping with the 2017 Nobel Laurette Festival theme: “Celebrating Excellence” Fostering National Pride, JakoProductions will introduce its inaugural Jako Prize, to be awarded to a Vieux Fort artist (author, visual artist, musician, drama, dance, fashion) who has produced the most compelling art during (preferably) the previous year.

The nominees for the award include Sherwin Brice (music), Edward Harris (literature), Janice Samuel (visual art), and Imani Models (fashion/performance art). This year the award will be presented by the Mayor of Vieux Fort, OrriciaDenbow-Bullen.

The Vieux Fort Nobel Laureate Literary Night is part of an initiative undertaken by several organizations and community leaders to collaboratively ensure that Vieux Fort always hosts a well promoted and publicized activity to mark each of the national calendar events, the rationale being that the consistent hosting of such activities will help strengthen Vieux Fort as a community, instill confidence in the future of the town, and enable residents to take pride and ownership of their community. As such, the committee pledges to present events that meet and exceed international standards, the literary night being no exception.

According to the organizers, notwithstanding the value of this initiative, the gains do not pertain just to Vieux Fort, because as the second or third most populous town, the custodian of some of the country’s most important and valuable assets (Hewanorra International and Port Vieux Fort, for example), and the commercial and industrial hub for the southern half of the island, a strong and viable Vieux Fort makes for a strong St. Lucia.

Notwithstanding, it is fitting that Vieux Fort is hosting an annual literary night for there appears to be a growing body of southern literature, among the best of what the island has to offer, which no doubt is helping to raise the cultural and literary profile the town. These works include Dr. Anderson Reynolds’ three award-winning books—Death by Fire(2001), The Struggle For Survival: an historical, political, and socioeconomic perspective of St. Lucia(2003), and The Stall Keeper (forthcoming March 2017); Clive Sankardayal’s award winning novel, The Brown Curtains(2006); Dr. JolienHarmsen’s three critically acclaimed books—A history of St. Lucia(2012), the novel, Rum Justice(2008), and Sugar,Slavery and Settlement: A social history of Vieux Fort St. Lucia,from the Amerindians to the present(1999); and ModesteDownes’ two award-winning poetry collections, Phases(2005) and Theatre Of The Mind(2012). Accordingly, the event will include a video presentation of the works of these authors.

The Vieux Fort Nobel Laureate Literary Night is free and open to the public and will feature performances by primary and secondary school students. For more information on the event, please call (728-8840, 723-1349, 712-8024) or email the Committee (dolashleyme@gmail.com, jjames.stdc@gmail.com, info@jakoproductions.com).