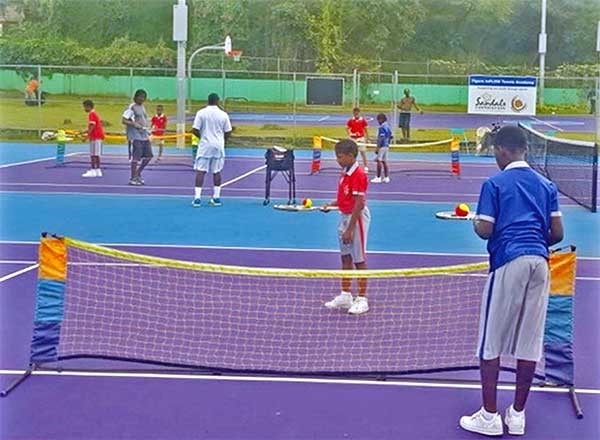 THE Sandals Foundation’s Tiger Tennis In FLOW programme is expected to reach more than 350 children this year, its third year.

The programme, initially introduced as a tennis club in 2008, transformed into an academy in 2016 and is delivered and managed by the principals of the Tiger Tennis Club at the Kenneth “Wriggler” King Multipurpose Complex in Castries.

In summer of 2016, following the identification of rapidly depleting resources and deterioration of the infrastructure, Sandals Foundation invested over US$43,000 to transform the now state-of-the-art tennis facility, thereby allowing the club to continue its mission.

The Academy emphasizes youth empowerment through education, discipline, dedication to sportsmanship and concerns on and off the courts.

Said Sirsean Arlain, president of the Academy: “We teach the importance of understanding the balance between sports (professional) and education and discipline (personal) development in order to be successful throughout life and become positive contributing members of society.”

Tiger In FLOW and The Sandals Foundation have advocated for equal opportunity for youth in Saint Lucia, underlining the importance of giving children an opportunity to be exposed to sports such as tennis at no cost.

From inception, the academy has given hundreds of children from age three through to adulthood a chance to play the sport. Sports have proven to be an effective way to engage youth via a medium that they enjoy whilst inculcating life-long skills and values, including discipline, teamwork, self-confidence and dealing with success and failure.

“I cannot put into words what the Sandals Foundation has done for us. The facility’s refurbishment totally changed the face of not only the facility but a part of our city. In 2017, we are making a push to include four more schools and also have meets (mini-tournaments) within our programme”, Arlain said.

He revealed a new twist for the 2017 season of the programme that will allow for a personal touch for each participating school.

“We are planning a jungle-themed event with each school adopting animal names and being introduced to team competition. We are pushing for eight schools matched up in a round robin competition. The plan is to get 50 kids from each school totalling 400 kids joining the programme all at once,” Arlain said.

At the end of the competition aspect of the programme, the 2017 chapter is expected to go further by admitting the best players from each school into the academy and furthering their training to have them ready for international standing.

Director of Programmes for the Sandals Foundation, Heidi Clarke, said: “We are making strides to change the existing culture where sports are considered only as a co-curricular activity. Sports are the foundation for lifelong skills that are needed in all spheres of life regardless of the career or personal path chosen. We still ensure that whilst we instill these disciplines in our children as we learn how to master the sport, we also present it in a child-friendly, action-packed atmosphere.”