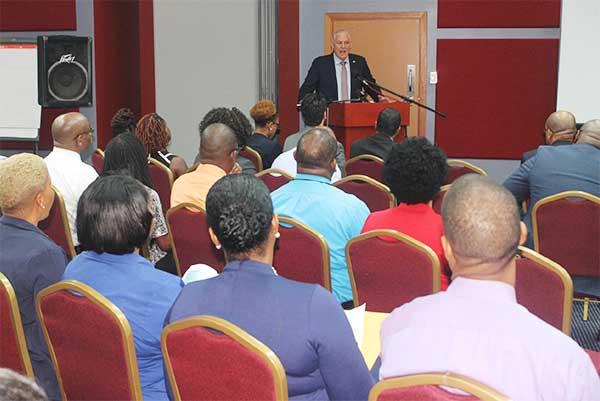 ST. LUCIA has launched the second phase of the Caribbean Growth Forum (CGF) discussing a new approach to track progress made in advancing reforms identified through the CGF in the areas of investment climate, skills and productivity, and logistics and connectivity.

The CGF provides a platform for 12 Caribbean countries to help track the implementation of reforms needed to spur sustainable growth and opportunities for the people of the Caribbean and foster greater focus on results, transparency and accountability.

The initiative is facilitated by the World Bank Group (WBG) in partnership with the Inter-American Development Bank (IDB), the Barbados-based Caribbean Development Bank (CDB), and with support from the United Kingdom Agency for International Development (UKAid), Global Affairs Canada, the Italian Development Cooperation, the European Union, InfoDev, the Competitive Industries and Innovation Program, Caribbean Export, CARICOM Secretariat and the University of the West Indies.

Prime Minister Allen Chastanet, told the two-day meeting that ended on Friday that “growth by itself is not the measurement for success; because you can have growth but if it does not filter down to the citizens of this country, and the sustainability of this country, we have nothing.

“There are four words that are very, very important to me and I want us to be able to embrace those words and that everything that you do you should be able to reflect those four words…capacity, utilization, productivity and competitiveness,” he added.

So far, more than 20 reforms have been implemented in St. Lucia. A key achievement has been the establishment of the National Competitiveness and Productivity Council (NCPC), an emerging regional best practice, which helps provide timely and effective advice to policy makers, the private sector and other stakeholders.

The first phase of the CGF focused on improvements in three thematic areas: investment climate, logistics and connectivity, and skills and productivity.

Officials here say that while these areas remain relevant it has been agreed that they should include access to finance, entrepreneurship and investment in competitive sectors to unleash innovation and creativity. This phase is expected to not only accelerating reform implementation, but will also leverage knowledge generated, make it more readily available and engage a wider group of stakeholders.

“We are encouraged by the government’s commitment to involving both civil society and the private sector in identifying and prioritizing the implementation of reforms most important to St. Lucians. As the Civil Society Observatory we will do our part to ensure stakeholders are held accountable and progress is communicated broadly,” said Yvonne Agard, Executive Director of the Coalition of Services

The CGF has the potential to not only generate results for the Caribbean but also inform policy changes in other parts of the world.

Senior Country Manager for the OECS for the World Bank Group, Juan Diego Alonso said, “sharing progress and lessons learned through the CGF can inform reform processes in other countries and regions around the world.

“To revive growth and sustain it, the Caribbean needs to address its challenges together. The renewed commitment of Caribbean countries under this second phase of the CGF is a real catalyzer to support new growth models for the region.

“St. Lucia, in making continued progress in this process, can serve as a model for the other participating countries, demonstrating how the CGF platform can support and accelerate reform agendas through an inclusive approach linked to specific indicators to monitor progress.

“Because of its participatory approach, each citizen has an incentive to track and monitor the issues discussed to make sure that the reforms collectively identified are moving forward,” he added.

An official statement issued here noted that St. Lucia plans to redouble its efforts to find consensus and prioritize the growth enhancing reforms for the next 18 months.

“As an immediate step, the St. Lucia government agreed to strengthen its planning and monitoring dashboard to track progress on its growth agenda, transforming it into a roadmap with clear actions, timelines and budget.

“In addition, the government is also focusing on how to deliver these reforms and stir private sector led growth. To this end, within the next 100 days the government is committed to take concrete actions to move forward on three priority reforms,” the statement added.