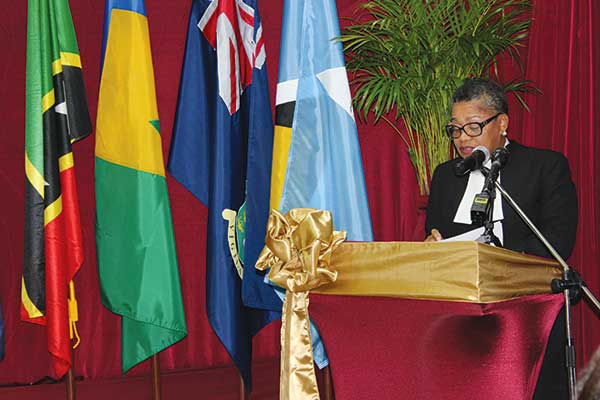 THE Eastern Caribbean Supreme Court is working on developing a family division as it prepares to observe a milestone on February 27 next year – its 50th anniversary, celebrations which will have a focus on children and young people.

A school essay and poster competition among primary and secondary schools is part of activities to mark the anniversary, which it is hoped will broaden the understanding of the Court among young people.

But while 50 years is seen as quite a significant milestone by judicial officers and governments in the nine territories of the Caribbean the court serves, it still has a distance to go to accomplish optimum efficiency.

Dame Janice Periera, the Chief Justice made the revelation at a ceremony Tuesday to launch the activities to commemorate this momentous occasion.

“Many plans are underway towards accomplishing this end,” Dame Janice said, adding that as the court expands a concerted effort has been made to increase its efficiency.

“This has resulted in the Court moving to an increasingly specialized approach to dealing with matters,” she noted.

Aside from hearing cases in its criminal and civil jurisdictions, the court has a commercial division in the British Virgin Islands and in St. Lucia said to be an asset to the territories. Now a family division is under consideration. A pilot programme has been initiated in Antigua and Barbuda. The Government of Dominica has also expressed interest in the establishment of a similar division.

According to the Chief Justice, the Court, today, sees a higher disposition rate for disputes than earlier years as the number of judicial officials had increased.

E-technology is presently being looked at ranging from conducting hearings by video and teleconference, digital recordings of proceedings and filing and processing cases electronically from commencement to disposition by enforcement.

“The ability to unlock e-technology in this way brings great benefits to the Court but the real beneficiary will be the people of our member state and territories,” Dame Janice said.

“As I reflect on the theme to mark the Court’s 50th Anniversary: Celebrating the Past, Embracing the Future, I am reminded of the place of the Court in the lives of the people across its Member States and territories. After all, this Court does not belong to me, or to the judges who preside over matters or to the lawyers who argue cases. This Court belongs to each and every person who lives across our nine Member States and Territories,” the Chief Justice said.

She added: “It is our Court. It is a fundamental part of our society and it is the institution in which our people place their confidence. Despite this, the reality is that many of our citizens know very little about the Court. It is for this very reason that we have decided to engage in a host of public activities to mark the Court’s anniversary. I personally cannot think of a more fitting activity to kick off our celebrations than the Essay and Poster Competition which will be rolled out at schools across the Court’s Member States and Territories. I think it’s important to begin with a focus on children and young people. It cannot be overemphasized that children are indeed the future of our region.

“If we can raise an awareness of the Court and the work that we do among our children and young people, then we will be well on our way to broadening the understanding of the Court in society as a whole. But the School’s Essay and Poster Competition is only the beginning. In the coming weeks, we will be unveiling many more activities, all with the aim of reaching out to every person whom this Court serves. We would like to give the citizens of the Court’s Member States and territories the opportunity to learn more about the Court’s operations and gain a greater appreciation of how we came to be and where we are today,” Dame Janice added.