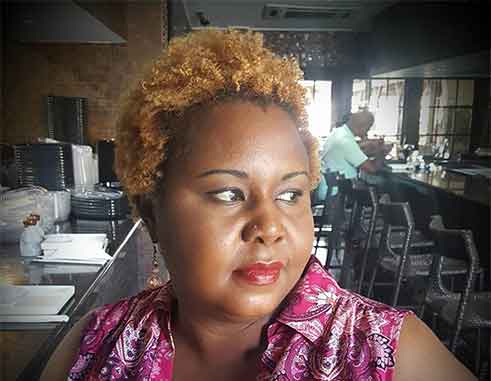 ACCORDING to many, diamonds are one of the rarest and most precious and beautiful things in the world…I say those materialist fools LIE because off the cuff, I can think of one thing waaaay more precious that any volcanic piece of glass…a true and genuine friend.

Now you might easily be mistaken into thinking that the friend which I speak of is you “Bestie” or “BFF” that you’ve known all your life, but whilst they count, I am actually referring to the friends we meet who we know nothing about…sometimes complete strangers who would yet still go out on a limb and do everything in the world to help you out, with no ulterior motive or underlying reason to get something in return.

Today’s WOTW is one of those friends. And I’m certain that she has a pair of angel wings that are either kept well hidden with clothing or are invisible to the naked eyes.

Kentillia Louis is a humble yet outspoken Theatre Arts Curriculum Officer in the Ministry of Education but is also a youth advocate and cultural practitioner.

Louis is the kind of woman who opens her car, house and heart to people in need of a listening ear and a shoulder to cry on at any time and she does it without asking for anything in return.

In a world where everyone is seemingly for themselves, whilst looking for the next soft hearted chump to take advantage of, Louis stands out from the rest and remains humble and inviting, even whilst aware of the pitfalls of being “nice”.

When asked by The VOICE, why she feels the need to be that way, she said she is simply giving back to life and the universe as she was once a person in need of the very same care and attention whilst going through extremely rough patches in her life, and she got it…in fact, she said that’s what saved her and made her who she is today.

Louis said: “I know what it’s like to have a hard day or to have things going on…issues and all sorts of things. Now you see that over thinking in your head? Sometimes, all you need is just a listening ear, and that can make the world of a difference. So when I needed, I got and I think it’s my duty to pay it forward. That’s what I try to do. I’m just doing what I think is supposed to be done…that’s the way it should be. We’re all on this journey of life, trying to find the best version of ourselves or create the best version of ourselves before we leave this earth, and I want to know that when I look at myself in the mirror at the end of the day, I know I am happy with how I treated people and with the decisions I’ve made.”

Louis said she is in no way worried about the individuals who might seek her out only to use her and take advantage of her good nature.

She said: “You have to know for yourself and how much you can give without depleting yourself. Because sometimes, people take advantage…not for negative reasons or because they’re trying to be destructive, but sometimes people are just so not accustomed or don’t have somebody. So they end up taking more than they should or they become very dependent. And it just might be that at that point in their lives, they need an extra crutch. So I don’t look at it as that. I give as much as I can give.”

With all the division in the world, it has always been noted that the problem is seemingly concentrated among women.

Louis said: “I think women, especially the division, come from a lot of self esteem and self worth issues that have been perpetuated in our society. Unfortunately for a lot of women, the best way for them to develop self worth and self esteem is through competition and through trying to show they are better than. That constant need to be on show…to have that façade that people must see, and the idea of breaking you down and allowing you to get close to them, it’s something that they fight a lot. We are not taught as women to accept ourselves for who we are. We are not taught as women that we are the centre of our own universe, and that is a strength that enables you to help people, and do a lot, connect and have a great life…that is not something we are taught. It is something that we will constantly have to battle with, but at the end of the day, when we do get there; try to see how we can help others.”

Now Louis’ secret flew me through a loop because it is reminiscent of Cara Kent and Super girl…one woman, two personas.

Surprisingly, Louis is extremely introvert and enjoys spending time alone and away from people in general.

Imagine my shock to hear her say: “I spend a lot of time either alone or one on one with selected persons. But I’m not a social butterfly.”