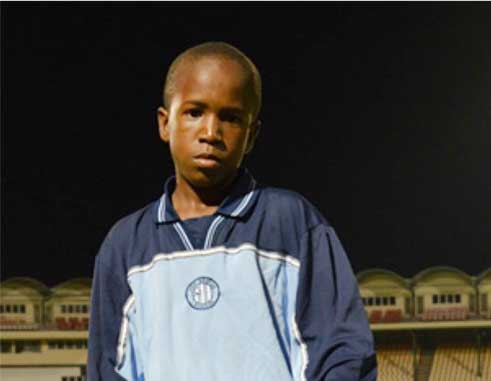 THERE are hundreds of young boys around the world who dream of being national footballers. But with so much pressure being placed on them at a very young age, it is easy to see why many get distracted and lose their way.

The VOICE spoke to ten-year-old striker Taye Peter about life as a young ball boy/footballer and how he intends to keep focused on his career.

Taye, who hails from Gros Islet, caught my attention at the Daren Sammy Cricket Ground during the ongoing Blackheart Production/Saint Lucia Football Association Knockout Tournament at halftime during one of the matches.

At the time, he and other ball boys under the watchful eyes of Jennifer Gaston were having fun and showing off their football skills on the field. The VOICE was there to take in that special moment and highlight the young man after he perfectly scored a goal some 25 yards out.

This is Taye Peter story as to what he wants to do and what he would like to achieve in life as a football player.

The VOICE: What school do you attend, what is your favourite subject and why?

Taye: I attend the Gros Islet Primary School, my favourite subject is Mathematics. I like Mathematics because it’s an easy subject.

The VOICE: What attracted you to football?

Taye: I started watching football on the Gros Islet playing field and on television at an early age and hearing my two brothers Tommy Phillip and Jordan Peter talk about it. They both play for Northern United as well, but will talk highly about Lionel Messi (Argentina) and Cristiano Ronaldo (Portugal) and the various teams like Barcelona, Real Madrid and Manchester City. My favourite team is Barcelona and my favourite player is Neymar from Brazil.

The VOICE: You’re still at a very tender age. But if you do decide to make football your career, how far would you like to reach?

Taye: Farther than any other Saint Lucian has reached or played and that is representing my country at a World Cup and hearing our national anthem playing in the stadium.

If he does continue to pursue his dream, Taye will be 20 years old by the 2026 World Cup. Who knows? His dreams might well become a reality and result in him representing Saint Lucia at the World Cup.

Taye said he enjoys being a ball boy, adding that it gives him a real taste for being a footballer. After showing of his talent at training for Northern United Under-14s, he said the experience made him more determined to make it as a footballer.

The rise of social media has put added pressure on footballers to have perfect on and off the field behaviour. National Under-20 players such as Nyrone Winter and Melvin Doxilly are two such examples of increased media presence in terms of footballers’ lives.

Nyrone and Melvin recently returned to the island from England where they underwent a two- week training camp with Manchester United. However, at such a young age Taye’s attitude to his career and to the social pressures he will face down the road will impress any coach or manager that will give him the best chance of succeeding.

Taye’s obvious footballing abilities include great awareness and excellent kicking/ passing. He is a good communicator, a leader on the pitch in terms of discipline and mannerism and during the time I spent with him at the DSCG, he showed the desire to help out his teammates as well.

The young striker is confident and assured but as with many young players he is not yet the finished article. He will be looking to improve his game as time goes by and come this school term he will be in the thick of things when he represents Gros Islet in the Under-13 Inter Primary School Football Tournament that kicks off on Monday, October 31.

The Gros Islet Under-14s finally have a very level-headed youngster in their ranks and if he keeps his determination and focused attitude, he will have a bright future. The next few years of his career will be important and no doubt football fans in Saint Lucia will be keenly watching his progress up until 2026 and beyond.