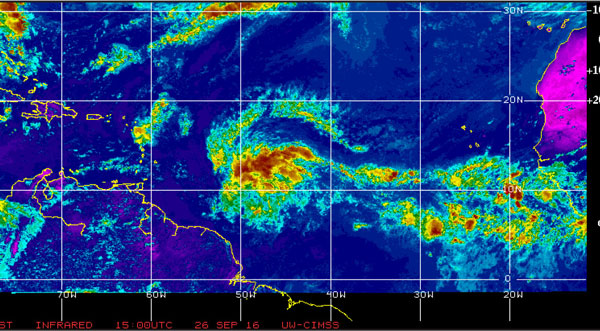 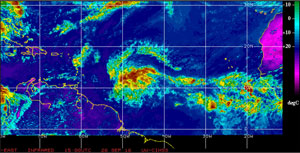 SHOWERS and thunderstorms associated with a broad area of low pressure, centred near Latitude 9.9 North Longitude 48.6 West or about 950 miles east-southeast of the Windward Islands have increased and become slightly better organized.

Just before going to press yesterday, environmental conditions remained conducive for development, and a tropical depression was likely to form while the system moved westward to west- northwestward at 25 mph. Maximum sustained winds 30 mph.

Regardless of development, heavy rains and strong gusty winds, possibly to tropical storm force, are expected to spread over the Windward Islands and portions of the southern Lesser Antilles beginning late today or Wednesday. An Air Force Hurricane Hunter aircraft is scheduled to investigate this disturbance this afternoon.

Satellite loops showed the system was growing considerably more organized, with more curvature to the cloud pattern, an increasing amount of heavy thunderstorm activity, low-level spiral bands that were getting more defined, and upper-level outflow that was becoming better established to the system’s north.

The storm’s organization was being aided by low wind shear of 5 knots, a very moist atmosphere (relative humidities at mid-levels of the atmosphere near 70%) and warm ocean waters of 30°C (86°F).

Meanwhile, residents and interests in Saint Lucia and the Lesser Antilles have been asked to monitor the progress of this system and take the necessary precautions