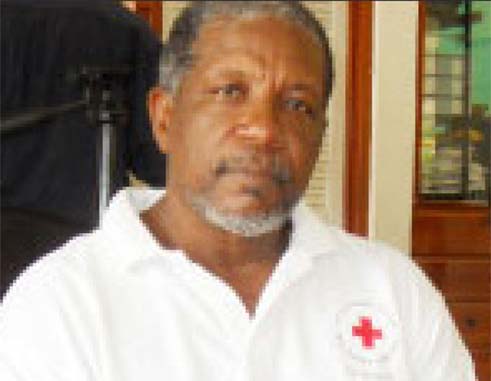 THE St. Lucia Red Cross is sending out a reminder, urging St. Lucians to remember that the hurricane season is still on and that they should not let their guard down.

President of the St. Lucia Red Cross Hubert Pierre told THE VOICE that the organisation is working hard to inform St. Lucians about the dangers they may be leaving themselves vulnerable to, if they are not well prepared for a natural disaster.

He said some people seemingly fail to recognize that climate change and global warming are very real and are having a blatant adverse effect on the environment and its seasonal behaviour.

Pierre highlighted the 2013 Christmas Eve trough that was not a storm or hurricane, but came with enough water to ravage the island’s infrastructure and claim six lives.

He said: “When people hear notices and warnings they’ve got to take them seriously. The first storm we had this year was in January which is freaky. I am a believer that the hurricane season peaks but a hurricane can come at any time, seemingly. So one must always be very careful and during the given season, you must be more vigilant than you would be normally.”

The Red Cross President advised people to continue listening to their radios, because although the Red Cross is willing to help, people must also be responsible.

One of the most vital pieces of advice given by the Red Cross, according to Pierre, is to have an emergency bag that is always packed with sustenance for three days, and is easily available in the event that one needs to quickly evacuate the home.

However, Pierre said with this important advice comes the major disappointment as many people fail to follow this simple, cheap and life- saving tip.

He said: “It’s a reality and a fact that St. Lucians have to learn, but I don’t think they have learnt. Sometimes you see them going back to the same bad habits…you hear an announcement of a storm coming and everybody runs to the supermarket, especially in September when school should be opened, and they take the money that they have for books and everything. Then they stockpile their homes and when nothing happens, they blame everybody, forgetting that it was a simple forecast. You have to make the relevant preparation. I’ll say to them again, if you are going to plan for this, from December or even January, when you go to the shop, buy two extra tins of milk, one corned beef the following month, and by June, you have a nice little stockpile that you can call your hurricane stock. Every month you look at the dates and if it’s about that time to throw it away or use it, consume it and buy a new one because it’s close to the expiration date. This is what I want St. Lucians to understand. You can practise these things and prevent yourself from spending lots of money instantly, money that you could have used otherwise.”

Once this is done, Pierre said one can rest assured knowing that they have done what was needed in an emergency.

Another important piece of advice that Pierre shared, was for people with medical conditions.

Pierre said: “Those who are on medication, especially now, should try to keep two months supply. If you normally have for one month, talk to your doctor because you are dependent on them, so you should keep two months’ supply. We never know what’s going to happen. If you have two days before you are due to go back to the pharmacy and there is a disaster and you don’t have the medication, you can suffer more. This is especially for people who are diabetic and people who have non-communicable diseases…They must be wary of that fact that they should have extra medication.”

According to Pierre, the Red Cross needs the help of the media to get these warnings out to the public and he believes that it takes more than going out in open spaces to talk to people.

People, he said, do not read much anymore with today’s technological era being as distracting as it is. However, the onus is on people to decide what the dangers, threats and hazards are and to try to militate against them. The key, he said, is to have a plan…just in case.