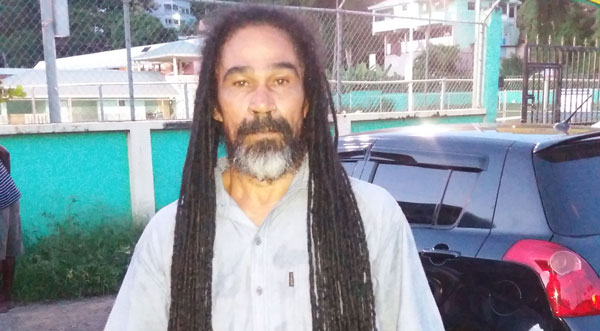 Man Wants Compensation for Vessel Given To Him by The Police

One man is hoping to put an end to a troublesome issue that has dragged on for two years and involves the Customs Department and a shipwrecked boat.

Anthony Joseph first came to The VOICE in 2014 with his story about a 15-foot vessel that was trapped on the rocks off Pigeon Island five months prior.

Joseph explained that on the day of the discovery, he was on the beach in Gros Islet when he saw a group of people headed towards the landmark.
He said it was not until he noticed a police officer who regularly patrolled the beach head towards the crowd that he decided to follow to see what was going on.

Upon arrival, Joseph, a construction worker, said he saw the vessel stranded on some jagged rocks in the sea and in the vessel was a brand new motorcycle wrapped in plastic packaging, along with cases of juice and other snacks.

He said: “The police officer who was on shore with us called for back-up, and more police came with a van and asked us to help them remove the bike. We did just that and put it in the van for them.”

Joseph said the police called the local Coast Guard, whom he said came and attempted to retrieve the vessel but, due to rain and rough waves, they were unable to do so and eventually left the scene.

He recounted seeing the police officers on the scene help themselves to the drinks and snacks that were also in the vessel.
“They told us if we can rescue the boat, it belongs to us. After hearing this, we saw a fishing boat passing, and we called them and they came closer they could not come all the way. One of the men jumped into the water and swam to us. He then swam back to his boat, got a rope, swam back to the stranded boat and tied the vessel with the rope that was attached to his boat. Three of us on shore, plus the guy from the fishing boat and his friend, all struggled and we eventually got the boat off the rocks and took it to the Gros Islet Fishery complex.”

Joseph said that at the Fishery, the same fishermen who helped them out turned the boat over and saw that it was badly damaged on both sides; however, he purchased materials, including fibreglass, and the crew of men brought the boat back to good condition.

He said well over $3,000 was spent to repair the vessel. However, after having it in their possession for four months, they were approached by the Customs Department, which seized it.

It was from that moment two years ago that Joseph said he has been making numerous trips to the department and consulting with one senior officer, seeking answers as to why the boat was seized after they were given permission by the police to take it.

Joseph said: “Every time I go to this man, he says the same thing to me: ‘It’s a long process, he has to take the matter to a judge, they will auction the boat and then they will pay us off’. That’s what he has been saying from 2014…Now in 2016, it’s the same thing he’s saying to me.”

A dejected Joseph explained that during that time, he took his pleas to the Office of the Prime Minister and other members of the Customs Department but to no avail. He said he also went to several media houses to tell his story, but no one aired or published it.

Joseph said he returned to see the Customs Officer last week whom he said, expressed his frustration over the numerous visits from Joseph and snapped that he was not the one who ordered the vessel’s retrieval and that he was powerless to help.

Upon hearing this, Joseph decided to return to The VOICE, which, in a bid to get the full story, accompanied him to the Marine Unit in Vigie on Thursday to take a photograph of the vessel. However, this was not allowed and Joseph was told that for that particular boat, he would have to be accompanied by a Customs Officer in order to be granted permission to take a photo of the said vessel.

The VOICE also attempted to get a statement from the Customs officer who was dealing with Joseph’s case but was told that he was in a meeting.

Fortunately for Joseph, he met with the Comptroller of Customs, Andy Fenelon, to whom he explained the matter.

Joseph said Fenelon revealed that he had no prior knowledge of the case, but gave the assurance that the matter would be investigated immediately.

He said: “He let me know how unfortunate it was that I had to go through all these issues as in the first place. I didn’t even have the right to rescue and fix the boat. He let me know that from now on, he will take care of that, he will confront the officer I was seeing and before the end of the day, he will call me. So, I’m awaiting his call.”

Fenelon declined to give a statement to The VOICE. He said: “I have nothing to say to the media. I have no business with The VOICE, my case is with Mr. Joseph.”

Joseph meanwhile is anxious to take possession of his boat or be compensated for his expenses in repairing it.