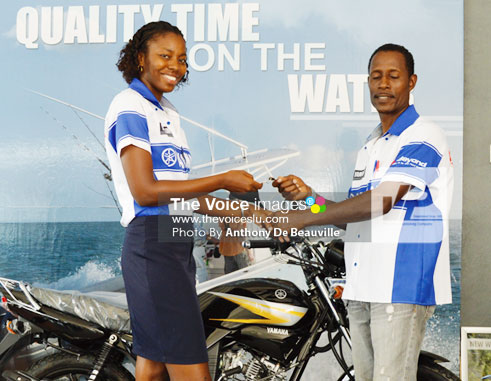 ST. LUCIA has a new Motocross champion .The new man in town is Oswald Simon who rode to supremacy during the St. Lucia Moto X Club’s final event of the season held recently at the Cul de sac track in front of an appreciative crowd.

On the final day of competition in Class A – Simon was a class act when he accumulated 75 points to finish ahead of eight other riders. He said later: “With my determination I was able to pull it through and here I am the winner of the YBR125 Yamaha”.

Managing Director for K.L. Marine, agents for Yamaha, Gregor Neil-Louis said Yamaha was proud to have been the title sponsor of the Motor Cross Championships for 2016. The company also sponsored the first prize in the Class A category of an YBR125 motorcycle which was won by Simon.

He also congratulated Bryan Leonce who was the company’s only Yamaha sponsored rider for the season 2015/16.

Now in his 15th year into Motocross, Simon spoke with THE VOICE about his love for the sport. He said: “It’s a growing sport. I believe it has a lot of potential to grow. The level of competitiveness we had at Cul de sac was very high until the last race, where we had one of the French guys who came over. He just won a championship in France. I raced with him; I happened to pull it off and the win ahead of him, was very competitive”

How much will it cost someone who is interested in motocross? Simon confessed it was very expensive getting a motorcycle. He said: “ A motorcycle costs a lot. For me it is in the region of at least $26,000.00 and to maintain it you need parts, safety gears, you need a helmet. You need parts. Motocross is a very expensive sport, that’s one of the reasons why you don’t find many people participating in that sport, but it’s a very fun sport”

He continued: “Since Yamaha came on board they have been very supportive of the St. Lucia Moto X Club. They are always there with us. Based on what I am seeing at present they will continue that gesture to be there with us. Yamaha is a brand that is all over the world; people know that Yamaha is a very good brand bike. I am looking forward to 2017 to ride a 450 Yamaha because it’s a very good bike. It’s the highest level”.

VOICE: The Moto X Club in St.Lucia has been taken for a roller coaster ride now for well over 20 years. The track has been moved on three occasions at Pigeon Island and now twice at Cul de sac.

On this present site are you pleased with the quality of the track?

“As competitors we have to improve on ourselves so we can go out and represent St. Lucia in the outside world. That is our intention”.

Simon said he is looking forward to 2017. “My goal and intention are to stay on top so I can defend my title”, he said