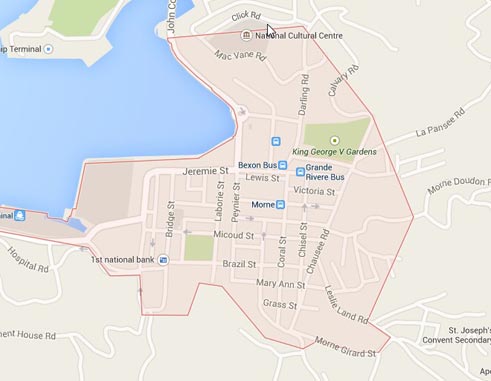 WE cannot continue to allow the decay of the city of Castries and bold and decisive steps must be taken to save the city. We believe that to enhance the attractiveness of Castries demands ensuring that there are good conditions for business, residents and visitors.

We believe that if we ask ourselves these fundamental questions that the platform would be set for Castries to be the most exciting city in the Caribbean.

We are proposing the following interventions as prioritized projects for Castries. We have defined the zone of influence of Castries to be from the Vigie junction including Vigie along the La Clery Road up to La Pansee into the Morne du Don Rd down to Bocage into Entrepot then up to Bagatelle across to the Morne down the La Toc Road.

PARKING
Parking in Castries is now a nightmare and the attractiveness of the city is significantly being diminished because of the lack of parking facilities. We intend to create a Park and Ride system at the Vigie Junction in the lands just north of the runway. The intent is to provide the possibility for residents of the north to park on the outskirts of the city and take a bus into Castries. The second concept is for only short stay on street parking in the Central Business District for up to two hours. All long stay parking will be accommodated in a new Multi Storey Car Park south of Brazil Street.

GOING GREEN
With the removal of a significant quantity of the vehicles in the central business district, the conversion to green spaces shall begin. A new programme dubbed GOING GREEN shall be implemented. This programme will involve the restoration of the King George V Park to its former glory. GOING GREEN involves landscaping and the use of renewable energy in every function within the green spaces. The POND in the Park will be covered to create an outdoor Cultural Stage. This project will consist of constructing columns within the pond to support a new slab above the pond. This removes the present visual scar and creates usable space. All the lighting within the Park will be using renewable energy; irrigation will be from rain water harvesting. The entire park will have free Wi Fi.

The William Peter Boulevard will be pedestrianized and the similar GOING GREEN initiatives pursued. The Derek Walcott square will also be refurbished as part of GOING GREEN.

LEGISLATIVE CHANGES
There will be legislative changes to allow the State to demolish any structure that is a public health and safety concern. The legislation to be drafted will allow recovery of these costs, with the State placing a caution on the property which will be removed on the payment of the cost of demolition and continued maintenance and associated interest over the period. Once the legislation is approved, all these derelict and abandoned buildings will be demolished. The business community must play a role in making Castries attractive and this present practice of leaving large quantities of garbage overnight will not be tolerated. We intend to pass legislation which places huge fines for this activity, and the legislation will empower any citizen to bring it to the attention of the City Council and be rewarded.

INNER CITY RESTRUCTURING
The present configuration of that block from Jn Baptiste Street/Darling Road/John Compton Highway and Jeremie Street cannot continue as it is now. You cannot have your city descend into an expanded rum shop. The entire section of old housing units within that block will be demolished. A series of multi- storey apartment buildings of studio and one bedroom units will be built with commercial space for young entrepreneurs in IT Technology and other support services to the Central Business District.

FLOODING
We believe that the flooding in Castries can be solved by engineering intervention. It is our intent to ensure that this annual occurrence of flooding in Castries is removed. We believe that the solution lies in understanding the upper catchment, the existing drainage regime and the possible enhancements. Both pump houses will be fitted with generators to ensure functionality when there is loss of power. As it was in the past, a pump house attendant will be hired for each pump house, and will be given responsibility to ensure the pumps are in continuous working condition. The urban drainage system will be reviewed and a full maintenance schedule will be developed in consultation between the Ministry of Infrastructure and the Castries City Council.

We intend to make Castries the most attractive place to work, to live and to be entertained.