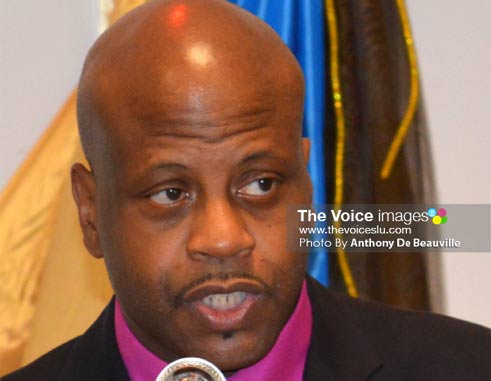 Sponsored | Article continues below
Share this post:
THIS weekend well over 425 junior track and field athletes will converge on the George Odlum Stadium with the hope of qualifying for the CARIFTA Games scheduled for Grenada over the Easter weekend.

But looking from the inside out, the venue is certainly an eyesore suffering some serious deterioration over the years. It has been used as a hospital ever since the fire at St. Jude in 2009.

The VOICE spoke to the SLAA President Wayne Burton about the situation and the safety of the participating athletes. This is what he had to say: “I think behind the scenes we have expressed our disappointment as a national organization, and as President I have expressed my feelings about it as well. The stadium has been occupied since September 2009. If you do the math, that is 7 years ago. We believe it would have been time for us to utilize the stadium a little more. Right now, we have very little use of it.

“The outdoor of the facility is what we have access to. A lot of the rooms have been taken up. Even some of the equipment rooms that we once had have been taken up as well. Some of our equipment has even been utilized by the hospital for their setup as well. In some instances cases it is hazardous because there is falling debris from the roof. So we keep telling the athletes to stay clear but it is disappointing to us that the hospital is still in there. While there was a crisis at that time, it has lingered for too long”.

Burton added, “I think we ought to have given more due respect or due attention to our sportsmen and sportswomen. Primarily because of the status of the stadium and the rehabilitation of it, the Government of St. Lucia decided not to go through with the hosting of the Commonwealth Youth Games 2017. And track and field would have been the major component of the games”.

He continued, “It has kind of set us back because there were some additional plans for us here locally, International training of officials, likewise of our athletes. And we were hoping to capitalize on the hosting of these activities in St. Lucia to boost our sport. Our last major event here was in 2009 when we hosted the 38th Carifta Games and since then we have not been able to utilize the stadium to its fullest. So that has kind of set us back”.