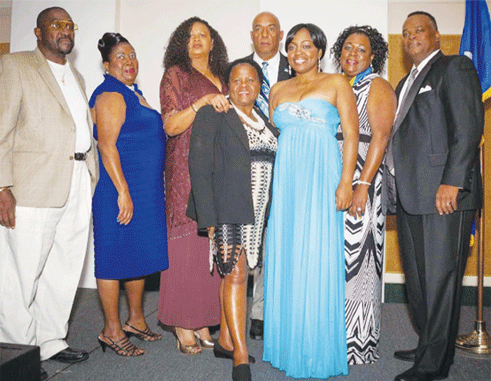 SAINT Lucia’s in Florida celebrated the 36th anniversary of their country’s independence in grand style on February 21 with a Gala hosted by Consul General of Saint Lucia in Miami, Kent Hippolyte.

This historic and auspicious occasion united the Consulate with three diaspora groups in South Florida for the first time:

*The Children of Helen Alliance Inc, a four-year-old organization, which focuses on promoting educational, social and cultural interaction amongst Saint Lucians to contribute towards the empowerment of people of Saint Lucian heritage;

* The St. Lucian Friendly Society – just over ten years old, which serves as a source of critical support for Saint Lucians at home and abroad with expenses associated with one of the most difficult and inevitable moments of life – the death of loved ones;

* and the Saint Lucia Association of South Florida Inc., the oldest of the groups having been established almost 29 years ago and whose mission is to collaborate with the Saint Lucia Diaspora in Florida, to contribute, facilitate, and promote solutions for the enrichment of the lives of citizens in Saint Lucia and in Florida, all came together in a fine display of unity and common ground.

This Independence Gala utilized the resources of the Consulate and the three groups to observe their homeland’s most important holiday. The event was held at the Signature Grand in Davie, Florida with Saint Lucia’s Ambassador for Diaspora Affairs, Dr. June Soomer as the guest speaker. In her speech on Saturday evening, Ambassador Soomer urged Saint Lucians to remember Saint Lucia’s “coup de main” tradition and to embark on an independence journey of upliftment, one “about our humanity, about our love for self, for each other, for our country, for our good earth”.

On Sunday, February 22 a church service was held at the St. Bartholomew Catholic Church on Miramar Parkway. This was followed by a brunch where Ambassador Soomer again addressed the Diaspora. The Ambassador encouraged Saint Lucians to take up the challenge of being investors in their own country.

Investment in Saint Lucia, according to the Ambassador, did not have to come from only rich countries or large companies. Everyday Saint Lucians could pool resources together in smart, innovative ways, raise funds and build powerful, successful companies themselves to invest in their island home.

The Ambassador made the critical point that migration and “brain drain” did not have to be viewed as negative elements; not if proper structures were put in place to allow and encourage the Diaspora to give back or contribute from anywhere in the world. She encouraged Diaspora organizations to expand their membership base, particularly among the youth, and underlined the importance of Saint Lucians not being risk averse, actively exploring fund raising, risk management, finance and investment in an effort to be champions of their own development.

A final activity held to commemorate the occasion was a Literary Competition in which children in Florida and Saint Lucia, in three age groups (5-8, 9-11, and 12-15 years) were invited to write brief pieces entitled “Why I am Proud To Be Saint Lucian”. Of the three winners, two were from the Laborie Girls School in Saint Lucia – BrehanaChiquot and Nubia Smith – while Crystal Tisha St. Martin from the Corinth Secondary School in Saint Lucia. Each winner received US$100.

A first time united effort, it is hoped that this year’s celebration of Independence in Florida becomes a model annual event, encouraging togetherness, upliftment and progress.