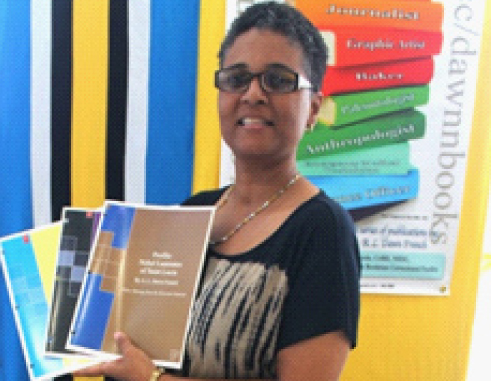 ONE of the best ways to pass on or preserve information is by publishing it in books.

Much of what we know now about our past is due in part to authors laboriously penning for posterity the words they think will greatly assist our knowledge of times past, present and future. But Dawn French’s love for books has seemingly given us way more than we bargained for.

French is one of the 90-odd Saint Lucian authors whose works are being featured in a literary exhibition now on at Blue Coral Mall in Castries. The exhibition, which ends on February 28, features a vast array of titles on various subjects, including Saint Lucian history. Among the titles are works from Saint Lucia’s two Nobel Laureates, Sir Arthur Lewis and Derek Walcott, whose lives and works are the focus of the soon-to-be-concluded Nobel Laureate Week.

“I’ve always been writing,” French tells me as she glances at scores of her books neatly laid out in her booth. “Even while I was attending the Methodist School, you’d find my five-line poems in The VOICE. That’s how I and many others really started – by submitting pieces to the newspapers of the day. It was so exciting to run home from school to see your name in print.”

French describes herself as “a prolific writer who’s interested in many things”. The subject range of her books is vast. She specializes in fiction, non-fiction and career guidance books. However, there’s one subject area that’s really close to her heart that she feels compelled to preserve.

“For me, it’s really about the history of Saint Lucia because I feel like we’re losing it,” French laments. “(Former Governor-General) Boswell Williams died last year and so many people said they didn’t know who he was. Hunter J. Francois died and you got the same story. You’d ask people who Joyce Auguste is and they’d ask you the same question. I mean, these are people who have lived in our lifetime. If they’re around in our lifetime and we don’t know who they are, what does it say about those who lived over a hundred years ago?”

French recalled an incident some years ago when a young man asked Sir Arthur Lewis who he was, which annoyed many people at the time. It wasn’t the young man’s fault, she says, since the young man really didn’t know much about the Nobel Prize-winner. She believes that if the next generation does not know who the influential people who contributed to Saint Lucia’s rich history are, then it’s our collective fault.

A long-time member of the Folk Research Centre (FRC) and Saint Lucia National Trust (SLNT), French once did 11 tours in 12 months with the SLNT, writing an article for each tour and publishing them in The VOICE. Buoyed by that enthusiasm, she later honed her writing skills in her adult years and began self-publishing her books. To date, her collection has been speaking volumes.

“It might sound like an exaggeration but I think I’ve published about 300 books,” French says. “I’ve published 237 career guidance books, 20 profiles, 5 in the ‘What Works For Me’ series, 12 in the ‘Noel’ collection, 6 in the ‘Common Sense’ collection – not to mention the individual ones.”

Some of her works have been included in anthologies published by the United Nations and other agencies. She also donates some of her books to the National Archives in order to preserve the historical context of Saint Lucian life. French also participated in the now-defunct M&C Fine Arts competition and continues to do so in the National Arts Festival. Her books are available for purchase online but copies can also be purchased from her directly.

Despite dedicating her energies to penning our history, French recognizes that getting people to value crucial information relevant to them requires innovativeness and a heavy reliance on technology. For that reason, she also caters to the online audience.

“I know that some people are now non-traditionalist – they don’t want to hold a book in their hands. So reading has just phased into the Kindle and Nook generation and for them these books are also available online at Amazon.com. But I’m hoping that it’s just a transitional phase that we’re in. Unfortunately, it might just be a symptom of why Sunshine Bookshop was forced to close, resulting in us losing one of the most significant bookshops. When I began working at 16, I bought my first book at Sunshine Bookshop,” French explains.

French says the Ministry of Education ordered 120 copies her ‘Common Sense’ collection to have a copy in each school. However, she’s trying to partner with the ministry to get it onto the schools’ booklists so that the students can have their own copies. Through writing the books, she says, she’s been able to learn a lot by doing the research, “so it’s also an education for me writing these books.”

Some years ago, French served as Director of the National Emergency Management Organization (NEMO) where she was responsible for writing the island’s National Disaster Plan. Fellow author, Stanley French – her cousin – used to encourage her to continue writing. In fact, she eventually dedicated one of her books to the memory of her now-deceased cousin.

French confesses that while self-publishing comes with its inherent challenges, she gets much satisfaction from the end-product.

Her books do not include advertisements from corporate sponsors since she foots the entire bill for printing. Having a business mind and a desire to succeed, she says, has ensured that she continues to fill more pages with useful advice and historical reference.

“Initially, I needed $700 to print the first batch of the ‘Managing Money’ book. For many months I would put aside some money from my salary and printed my books when I had enough to do so. As soon as I sell my books, the marginal profits go into publishing other books, which explains why I was able to publish so many,” French explains.

When asked how she felt knowing that her works were being featured at an exhibition where homegrown Nobel Prize winners’ works were displayed, French replied, “I feel a bit lightheaded.” That might well be so, but she offers some vital words of encouragement for anyone wishing to take a page out of her book by getting into the writing and publishing business.

“You don’t do this overnight. You have to have a history of doing it. We all know what our talents are,” French says.