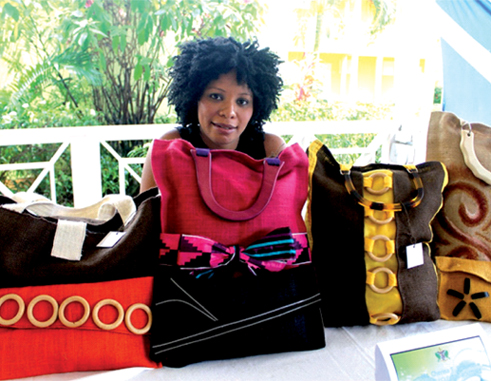 FOLLOWING one’s dream is regarded as one of the best adages.

It takes passion, dedication and some level of talent to actually realize that dream. Despite all the odds that can get in the way of that ultimate goal of accomplishment, living out one’s dreams can mean everything. If you don’t limit yourself and your goals to just sleeping through those dreams, that is.

For Cherisa Samuels, manager and designer of Rissa’s Eclectik Kouture, following a dream took on a literal meaning last June when she quit her day job to spend more quality time with her young daughter. After a while, she needed something to do to keep her creative juices flowing. She decided to buy a sewing machine to try her hand at sewing curtains. That idea came and left.

At the beginning of 2014, Cherisa weighed192 pounds. She made a promise to lose 50 pounds and made a video journal of her journey towards that goal. Realizing that goal and inspiring many of her social media friends along the way, she said, gave her the drive to take up a new challenge. Getting rid of excess baggage soon led her to creating a few trendy bags of her own.

Sometime later, she went to Antigua and stumbled into a store that sold “all sorts of odd things”, and later left Antigua knowing what she wanted to do – just not quite sure how to do it. Two weeks after returning from Antigua, Cherisa said she had a dream in which she was given specific instructions on how to sew a bag – how to cut the pieces and put them together. Despite having no prior sewing experience, she got up from that dream about 2:50 in the morning, and drew a sketch of a bag.

Later that day, Cherisa decided she would buy a sewing machine. After much protestation from her husband, Anthony, she finally went to Courts and bought one on hire purchase. Like the curtain idea, the sewing machine sat in the corner of her house for a few weeks, untouched. After running a few errands in Castries some days later, she bought some burlap fabric, which suffered the same fate as the sewing machine. Then something catalytic happened.

“As I was cleaning my home one day, I saw the sketch and that’s what made me go to the sewing machine, take it out of the box and try to figure out how to operate it,” Cherisa tells me. “It was smooth sailing from there. Sometimes I would get the inspiration to design bags in my head and then there are times when nothing happens. But everything I have made to date has been sold.”

Her passion for sewing bags saw her again pleading with her husband to go to Trinidad to buy fabric. She eventually bought the $1500 ticket herself and he gave her $500 to purchase the fabric. Since then, she has been on a roll, coming up with her unique bag ideas that come to life on her sewing machine. She also explained the creative experience that results in her catchy products:

“Everybody wants something that’s unique. And that’s the kind of feeling I want people to get whenever they carry my bag. The funny thing is that I cannot make a bag similar to one I’ve made before because I can’t remember what I make. So I keep growing and new things are coming to me and I’m just doing it. I use a lot of things from the environment – stones, shells, buttons – and things happen,” Cherisa explained.

Ever since she began sewing, Cherisa said it had always been her goal to have her bags displayed in a fashion show. She once told her Facebook friends that she would meet Trinidadian fashion icon Richard Young one day and have her bags featured in one of his shows. Last December, J.Q. Mall staged a fashion show and – to her surprise – he was there!

“It was just by accident that I went to see the supervisor to find out how I could get my bags sold on the supermarket’s periphery on Saturdays. She told me there was actually a fashion show coming up and asked whether I wanted to be a part of it, to which I agreed,” Cherisa said.

However, the remarkable opportunity that presented itself came with a condition: she had to prepare 14 bags for the event. She also wanted to create some outfits to go with the bags which she eventually did, adding that one of her favourite fashion designers, Sonia Noel, was also impressed with her work. As good as her start seems, she said she’s desperately trying to take it all in.

“Everything has happened so fast that I was not able to enjoy each moment. The calling came to me, I answered and everything has been on speed track. So I think taking pictures of the bags will allow me to remind myself of what I did. I crossed a hurdle and I am still proud of myself. My husband is a pilot and I’ve always been jealous of that. But now I’ve found something that I love to do. Now I’m flying, too,” Cherisa tells me.

Spurred by the positive feedback she has received thus far, she has also brought her prices down so that that factor does not become a deterrent for customers. Besides, it’s more or less a hobby for her, she said, because “as fast as I make money, I invest it in fabric. So right now prices are between $50 and $100.”

Cherisa said her current pregnancy has significantly slowed down her usual pace of making bags. However, the creative energy never ceases to the extent that she has bouts of insomnia. Her husband, too, is blown away by her progress and encourages her now more than ever to continue her craft.

Despite the odds, Cherisa believes that hadn’t she acted on the instructions she received in her dream she might not have found the inner peace she now feels. She also appealed to other prospective entrepreneurs to find their calling by answering it. In fact, her young business has been so infectious that up to the time of our interview she had no bags in stock because the last one was purchased within five minutes after she posted a photo of it on her Facebook page. She is encouraging them to take a page from her creative book.

“When you’re at peace, you hear things that you wouldn’t normally hear. Drown out the noise and listen to yourself and to God. He speaks to us and gives us directions. Associate yourself with people who share your vision. Keep negative people away. Nothing gives me more gratification than sewing a bag and someone buying it and going, “Wow! I love it! I love that feeling” Cherisa said, smiling.

For more information about Cherisa’ work, including videos about how her creative process, go to her Facebook page, Rissa’sEclectikKouture. You can also contact her at 723 5164 or eclectikcouture@gmail.com.