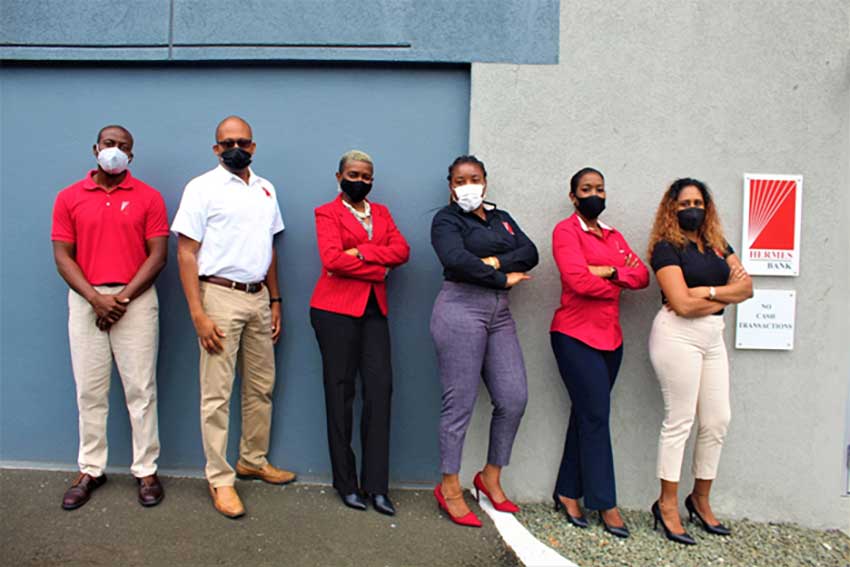 Having recently reached its ten-year milestone operating in Saint Lucia, Hermes Bank is seeking more ways to contribute to Saint Lucians and communities.

The fully-digital Saint Lucian bank has a physical office at Choc Estate and hopes to expand in the future. The Bank performs transactions for its primarily European and Caribbean clients and IBCs, dealing with operating and business-related expenses.

Most Saint Lucians might not know about Hermes Bank because the Bank for the most part does business with clients outside of Saint Lucia. But there are plans to broaden its portfolio in the future to include local clientele.

Chief Executive Officer, Jeanelle Jean, says Hermes Bank hopes to identify ways to upbuild Saint Lucians and our local communities. She said the Bank’s support thrust is essential since it has benefitted from the Saint Lucian landscape for the past decade.

“Since we’re a digital bank, we don’t get to interface with the Saint Lucian public much,” said Jean. “Hence the reason why we are trying to find ways to start making a more meaningful impact in our community,” she added.

Hermes Bank currently has ten employees based in Saint Lucia, some of whom have started partnering with UOcean Project, conducting monthly beach clean-ups for which the Bank provides sponsorship.

Based in the United Kingdom, UOcean is a global network with a mission to protect the ocean from threats such as plastics, illegal fishing, marine pollution, rising sea temperatures and marine degradation. The organization hopes to remove 1 billion kilos of marine pollution plastic by 2030.

“I’m very passionate about the environment and Hermes Bank has been happy to provide support to that initiative and team members have eagerly also pledged their support,” Jean stated.

In commemoration of its tenth anniversary, Jean said Hermes Bank’s shareholders have given a mandate to find ways of giving back to the Saint Lucian community. She added that the Bank has started identifying organizations that are doing work that it can sponsor, partner with and lend manpower to, where necessary.

“Our first such initiative would be partnering with the Saint Lucia National Trust which has indicated to us some of the areas in which they need assistance,” she explained. “We’ve selected one of their projects to fund and look forward to working with them again in the future. We’re also hoping to connect with the St. Lucia Olympic Committee (SLOC) Inc. and other organizations to see how we can assist.”

Throughout this year, Hermes Bank will continue to look for other initiatives. Beyond its tenth anniversary, they expect that many of these causes will become part of a more sustained and permanent commitment for the Bank. Jean says Hermes Bank believes that investing its resources in Saint Lucians is important because they have been the Bank’s foundation throughout the years.

Jean noted that as corporate social responsibility comes into sharper focus due to the COVID-19 pandemic and other global crises, Hermes Bank will try to be more creative by complementing financial support with volunteering manpower for various initiatives. She believes that giving back is an essential aspect of any company’s success plan if it hopes to truly enrich the community in which it operates.

“Even when budgets are cut because of the obvious challenges that all businesses may be facing, if you really want to get involved in making a positive difference in the community, you’ll find a way. Increasingly difficult global events present us with increasingly glaring opportunities to add value,” Jean said.

She added: “Throughout the challenges of the last two years I have also found that my team has been very responsive in giving of their time and resources for good causes. That being said as a Bank and a team and we will continue to do our part.”