The Taiwan Technical Mission in Saint Lucia, together with the Ministry of Agriculture, Fisheries, Physical Planning, Natural Resources and Co-operatives, concluded its Farmer’s Training programme on September 24, 2020.

The training was conducted over a period of six weeks throughout all of the agricultural regions of Saint Lucia, commencing from August 17th 2020. This year in particular, one hundred and twenty-three farmers from regions 5, 6 and 8 participated in this initiative. At the end of this training, the Taiwan Technical Mission and the Ministry of Agriculture hoped to achieve the goal of equipping local farmers with the knowledge required to offer higher quality goods, with increased harvests and products with a longer shelf life. The training programme taught farmers different customs to improve their processes of cultivation, harvesting and better storage practices. 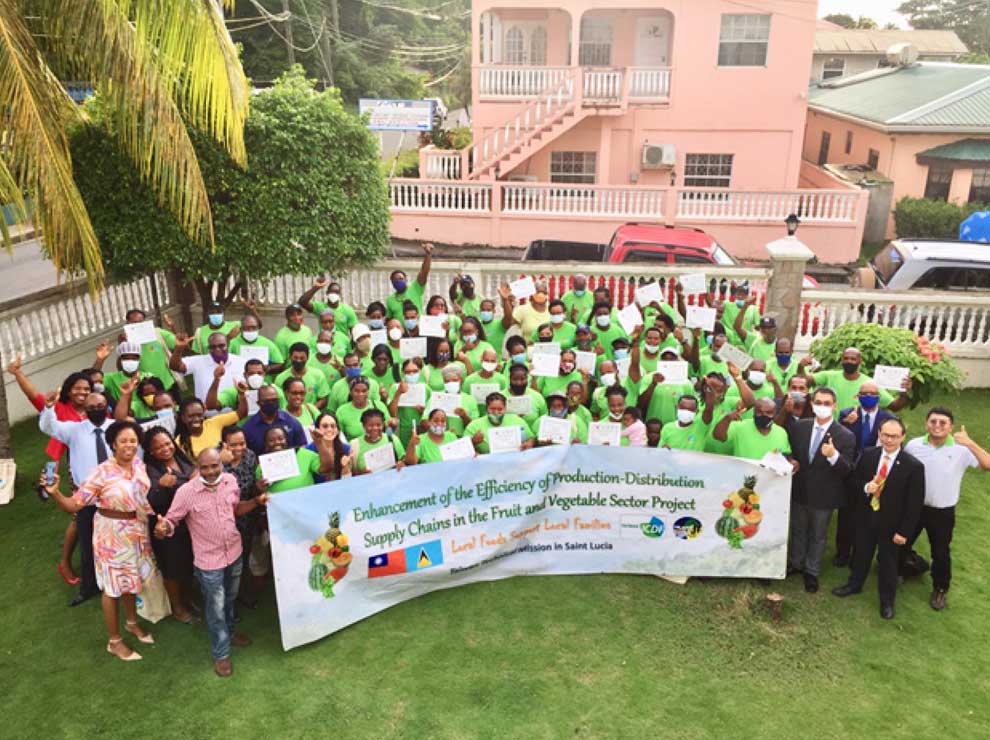 This training also offered farmers who did not have their Farmer’s ID card, the opportunity to become certified and receive their National Farmer’s Identification card. Farmers who possess a Farmer’s ID card are in a better position to negotiate the best prices for their produce. Most suppliers place more confidence in farmers who are certified and have a farmer’s card. This confidence stems from the fact that certified farmers with ID cards are more likely to provide a higher standard of fruits and vegetables to their suppliers. Therefore, farmers with ID cards are at an advantage after their training because it gives them a better chance at selling to suppliers such as hotels and supermarkets. Massy Stores for instance, pays ten cents more per pound to Farmers with an ID card than to farmers who do not have ID cards.

During the six-week tenure of their training, the farmers were proficiently coached on different subjects each week and learned practical and technical skills in agriculture as well as business and marketing. The sessions were facilitated via PowerPoint presentations and face-to-face interactions. The attending farmers were fortunate to have opportunities to ask detailed questions about their training while concurrently receiving answers directly from their technically capable trainers. This peer-to-peer learning encouraged invaluable experiences among farmers and significantly contributed to solving the issues surrounding Saint Lucia’s various micro-climates.

Each respective region culminated their training with an official graduation ceremony. On September 29th 2020, Region Eight exhibited twenty-six farmers at the Odsan Temple of Faith church. Then followed the graduation ceremony of Region Five on October 5th 2020 at the National Skills Development Center in Vieux- Fort. Thirty farmers successfully completed their training and also went on to receive their certificates. Lastly, an astounding sixty-seven farmers graduated from Region Six at the Cool Breeze Guest House Conference room on October 12th 2020. Initially, only twenty-five farmers were proposed to receive training per region, therefore by the large turnout received from this initiative, it is safe to point out the expediency of this training program in Saint Lucia.

During the ceremony, all of the specially invited guests gave their remarks on the success of the farmers training, as well as the positive impact it is expected to have on the agricultural market in Saint Lucia. Mr. Barrymore Felicien, Permanent Secretary of the Ministry of Agriculture, thanked the Taiwan Technical Mission to Saint Lucia, IICA and also Massy stores for their note-worthy contributions towards this initiative. He also extended his well wishes to the graduates on having successful farming careers. Mr. Gregg Rawlins National Representative for Inter-American Institute for Cooperation on Agriculture (IICA), also provided the same encouragement to the farmers in his remarks. He urged them to strengthen their newly established relationships with each other by sharing information, networking and supporting each other’s products. 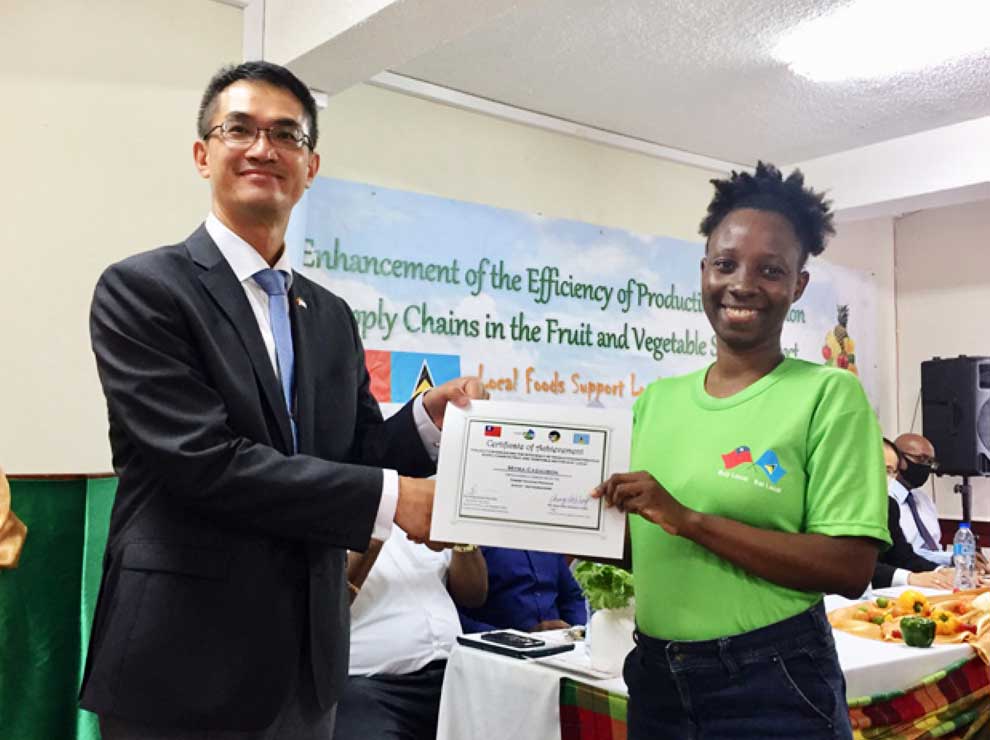 His Excellency Peter Chen, the Ambassador of the Republic of China (Taiwan) to Saint Lucia commended the farmers on the efforts and for continuing the course to its completion stating that it is not easy. He spoke of Saint Lucia’s massive import bill of fruits and vegetables such as watermelons and cantaloupes, and for this reason, Taiwan works closely with the Government of Saint Lucia to help farmers cultivate these crops locally and similarly reduce the country’s bill on imported food. Mr. Mario Cheng, Chief of the Taiwan Technical Mission in Saint Lucia, thanked all the specially invited guests and also the farmers for participating in the training. He urged them to continue being dedicated to their farms and to feel free to contact the Taiwan Technical Mission and their extension officers should they need assistance in the future. He also encouraged the farmers to ensure that they put what they were taught from the training into practice.

One of the graduates, Mr. Alex Faucher, provided his testimonial on his training experience. He attested to the substantial amount of education he gained from participating in this course, and said that he immediately put what he was taught into practice. As a result of this training programme, he is now equipped with the knowledge and confidence required to source and resolve any problem he may encounter on his farm.

The Enhancement of Efficiency of Production-Distribution Supply Chains in the Fruits and Vegetable Sector project focus on seven crops- watermelons, cantaloupes, honeydew, bell peppers, cabbages, pineapples and tomatoes- over a three-year period.