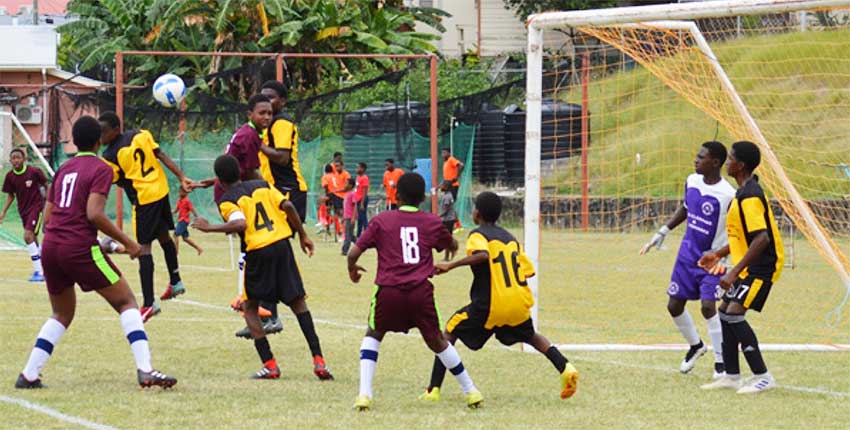 THE Gros Islet playing field was a hive of youth football activities this past weekend when the Gros Islet Football League (GIFL) in collaboration with Thomas Louisy, a resident from Gros Islet now residing in the USA, and Coach/Director of Allegheny Force held its inaugural Saint Lucia/USA Under 15 football tournament dubbed “Real Stars”.

The two day event which was a huge success attracted a combined 180 aspiring football players representing 18 teams from the USA, and host Saint Lucia.

Under near perfect weather condition, the various teams played a series of two, 15 minutes halves; the young boys, whenever they were given a chance, went all out to showcase their talent knowing that they were given a lifetime opportunity; if they perform well they will also get an opportunity to travel to the USA to further their education and to play the wonderful game of football.

The VOICE spoke to Thomas Louisy, the man behind the scene. This is what he had to say.

“What we are trying to do is to create more opportunities for players to play and if the players are working hard and excelling you want to reward them so they could take their game to the next level and that is one of the most important thing we are trying to do”.

“We have one scout on the ground, he is very connected with a lot of boarding schools, college coaches, and he is trying to see whether he can get a few success stories from Saint Lucia or at least one, so players coming through the pipe line will understand that if you work hard there are more opportunities for you”.

“This is just a start and we are hoping that if we can get more support to do more events like this, or make this an annual event, is something we love to do for the players because basically we are trying to help with players’ development and by having those tournaments and bringing scouts in is one of the main ways you could motivate the players”.

Louisy said, “We see a lot of players here with tremendous talent and what happen; at the age of 13 -14 years they are excellent, and when they get to 17 years, the question comes up. What happen to this kid? I don’t know, somewhere down the line some of them get lost, that is one of the reasons why we want to make a simple contribution to remedy that situation”.

VOICE: With finance so difficult to come by, what is it like for you to showcase such an initiative?

Louisy: “It’s not easy, this is my first time I am putting something together like this and I know it wouldn’t be easy. We went through a number of unforeseen challenges that we were not expecting; financially its costly and I am happy we were able to give a lot of players opportunities to play and have a good time and get a good experience; we also have one foreign team (Allegheny Force); we see a different style of football, it’s the club that I coach and in which I am a Director, they are originally from Pittsburg, Pennsylvania, it’s a good team and plays in the National League in the USA; we are happy to be here to see the level of play as well”.

The VOICE also spoke to Matt Kokoszka (Scout) about his visit to Saint Lucia. This is what he had to say.

“Football is an avenue to reach both sexes and two most important factors I am looking for in our candidates (1) their character, not just what they do on the pitch but what they do off the pitch, how they are with other people in the society, at home, in school because when you go and live at these boarding schools you are living in a community where there is a lot of rules and expectations to follow because I am looking for players that will be successful in that environment. (2) Grades, you have to be a good student, because it’s all based on education”.

“There are different opportunities that exist, some of the schools I work with have top football teams as well as and top academics; and there are kids that are fantastic students but don’t have a high level of football, but still want to go on and play, I still have opportunities for players like that as well”.

VOICE: Are you satisfied with the level of play you have seen thus far?

Kokoszka: “It’s my first time in Saint Lucia, and it’s kind of hard to evaluate players especially the 9 and 11 years old, but in terms of individual talent and skill and understanding of the game there is definitely some talent here, I have identified some players and I have already spoken to them and their families about what I do and the potential interest on going to the USA.

“Most players I have interviewed have 60 out of 100 percent which makes it more difficult for me, in speaking with the players and their families, the capabilities is there, it’s just the motivation or drive to do well in school is something that’s lacking a little bit on the island from both the students and the parents in terms of pushing that initiative of education as a path way along with football”.