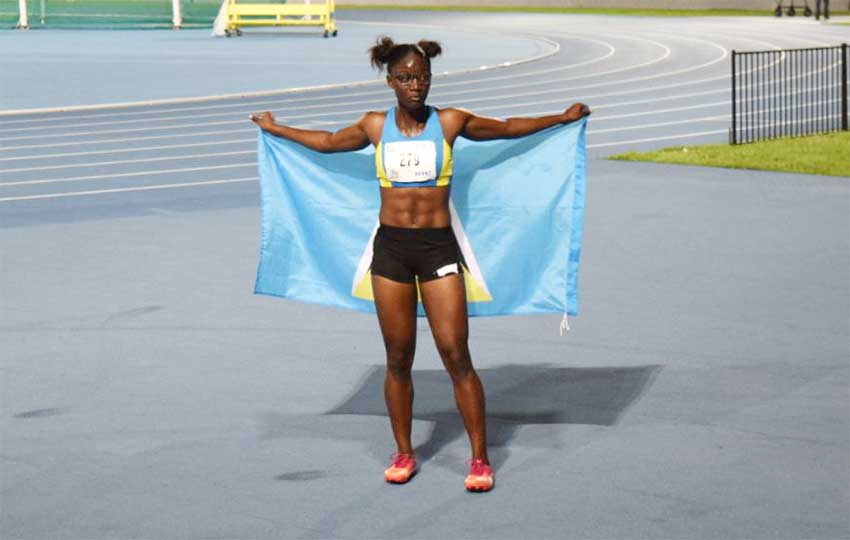 Said the administrator, who is part of an international organization with a number of national sports federations under its banner, “Let’s see who’s meeting the standards for Tokyo after tonight’s show?” meaning the sports award show that was held last Saturday.

He questioned whether it was an athlete who cannot meet the standards for Pan Am Games or one who met the qualifying marks.

“Sports awards judges have done it again. How can an athlete who failed to qualify for Pan Am Games win a title over an athlete who met the Games standard?”, noted the administrator.

He added, “You have an athlete who met internationally set standards, who participated in World governing body events and you have another athlete who gets to participate based on patronage and judges cannot understand the difference”.

“Personal best means nothing without context. Where did the swimmer’s personal best ranked her on the World stage? Where did Julien Alfred performances ranked her? Olympics coming, let’s see who going to Tokyo based on the fact that they have met the International Federation (IF) established standards. Those so-called judges will not have a hand in that when it comes to meeting standards. This is not the first time, track and field athletes have been robbed mercilessly by some misinformed individuals,” said the administrator.

The coach meanwhile spoke on similar terms as the administrator in his comparison of the two athletes wondering as well why someone who runs world class times, breaks junior and senior records records in the 100 and 200 meteres can’t win sports woman of the year.

The coach refers to the judges as donkeys “who do not understand the slightest idea about the level of performances”.

“Too many times we put people to judge these awards that have no understanding about performances and allow substandard results to mama guy them. You need to understand quality performances against quantity of medals and at what level. It is not the first time this has happened and it continues to happen,” said the coach.

He added, “Personal best means nothing without putting it into context. Where did the swimmer personal best ranked her on the World stage; where did Julien performances ranked her?”

According to the coach, “Sports awards are meaningless,” and the athlete who did not win the coveted Sports Woman of the Year Award will excel and achieve regardless of it.

“I will talk to her and make sure that this doesn’t discourage her. In due time she will receive an abundance of blessings more than this,” the coach said.

Up until now my cell phone continues to be inundated with text messages from the two well-known sporting individuals as they registered their angry disapproval of the judges’ decision to award the Junior Sportswoman for the Year to Mikaili Charlemangne (swimming).

So the question is, why are the two individuals pointing fingers at the judges who were in no way responsible for putting together the criteria for judging?

Why is there so much anger and animosity towards another elite athlete who has performed outstandingly during the year under review?

Why are the two individuals so emotional over this year’s results when it’s the same criteria that have been in use over the past several years?

Yes, there has been a tweaking here and a tweaking there of the criteria over the years – I have heard the likes of boxing, football, cricket make some rumblings when their representative did not win the prestigious award – but at the end, everyone take their defeat in good spirit and move on. Since then football has taken the decision not to send in their nomination for Association for the Year, it’s their choice though.

It must be noted that the two well-known sports personalities have and continue to contribute immensely to the development of sports. However, I want to remind them that track and field is slowly closing its eyes and the time is now to put that extra energy to reviving it and stop beating up and insulting people who are genuinely and honestly doing what they love best for free, my emphasis.

Who wants to steal a child, athlete or individual’s thunder/celebration? Judges can only judge on what is presented to them.

Carifta is around the corner; April 11th- 13th, Bermuda is the host nation. Tokyo, Japan host nation for Olympic Games, is exactly 153 days away. Let us focus on these two events and see how many podium calls Saint Lucia can achieve.

I must also point out that the two individuals are behaving as if they are not aware of the criteria.

So where do we go from here? In another forum, the suggestion was raised as to making changes to the criteria, why? Why make changes just to please a few individuals just because their athlete was beaten fairly and two years down the line because someone else did not win you have to come back to tweak again just to please.

I must say Kudos to those sportsmen and sportswomen including the likes of Levern Spencer. Do you believe she gets the best treatment when representing Saint Lucia? Certainly not! Even under trying circumstances she continues to bring smiles to our faces at regional and international meets.

To the two young princesses, Julien Alfred (Athletics) and Mikaili Charlemange (Swimming) I say go out and continue to be the person you are. One thing for certain, the Commonwealth High Jump Queen, Levern Spencer will soon call it quits after two unbroken decades of wearing our national colours, it is your time to fill those gigantic shoes, continue to represent Fair Helen with pride, dignity and honour.