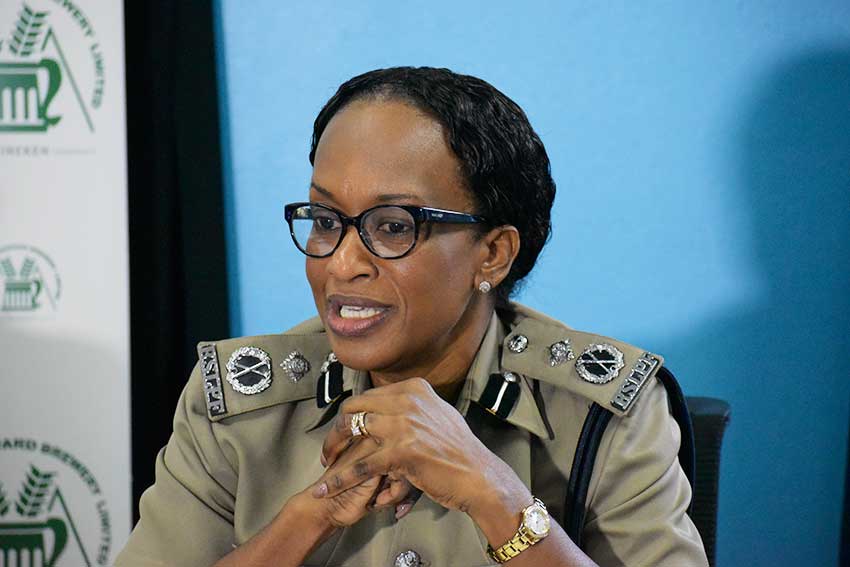 THE Vulnerable Persons Unit (VPU) of the Royal Saint Lucia Police Force (RSLPF) started a two-week major training workshop yesterday at the Police Training School in La Toc. The workshop, which is the first of its kind, was supported by the British High Commission with the objective to increase and strengthen the capacity of RSLPF officers within the VPU in dealing with sensitive cases. A Sexual Training Course will be the highlight of the workshop.

Steve McCready, UK Resident British Commissioner, who was present at the official opening of the workshop, told reporters, “This Sexual Training Course has been designed in collaboration with the British High Commission and the Police Force. It’s so important because the victims of the serious sexual crimes and crimes of that nature deserve to be able to have a quality, professional experience when they report these crimes to the police and this course will help the Vulnerable Persons Unit Officers to enhance their skills and their knowledge about how to deal with victims of those crimes.”

To head the workshop were British nationals Annette Clark and Charles Smith from the UK’s ACCS Total Training Limited. According to McCready, Clark and Smith were very experienced in their line of work. “They have all the experience of dealing with these types of cases. There is more to do in getting convictions for these crimes and making sure that those who suffer these sorts of crimes feel empowered to be able to report the crimes in the first place,” McCready said.

Crucita Pelius, Assistant Commissioner of Police in charge of Training, was also present at the opening of the workshop. In addressing the Officers of the VPU, she remarked, “During the course of the training, your horizons will be broadened.” She announced that officers will be taught in areas such as suspect identification management, evidence recovering, identifying victims and witnesses, report and communication, transactional analysis, decision-making, investigative techniques and forensic strategy.

In her address, Pelius stated, “This training is timely as women in our community – in our country, face sexual harassment and sexual assault, whether it’s at home, on the job, at school or in the communities where they live. These offenses impact negatively on the victims, psychologically, emotionally and physically and are difficult to be dealt with.” She said officers of the VPU were fortunate to participate in the training as they were the ones responsible for investigating sexual offenses. “You are the ones the victims will look up to or depend on to get sexual assault offenders apprehended and prosecuted. When you investigate professionally and are successful in apprehending and prosecuting offenders, you make it clear to the victims and citizens that this behaviour will not be tolerated.”

She said the best way of ensuring the required level of professionalism is by adequately training the VPU Officers to acquire the skills in order to execute their duties. She expressed her confidence in the workshop’s contribution to the professionalism she spoke of when she remarked, “When you (VPU Officers) return to your department there will be a difference in the way you perform your duties going forward.”