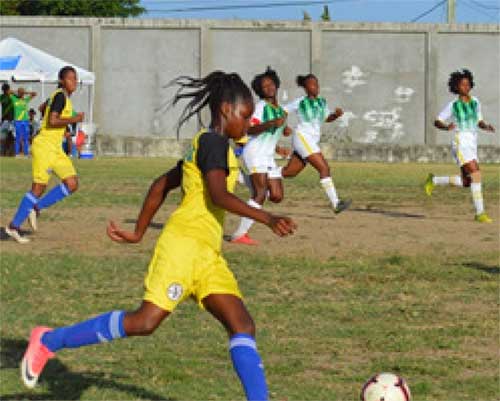 In front of a supportive crowd of football fans and family members, the Saint Lucia girls were in a no nonsense mood as they completed their final quota of international friendlies stipulated by the Caribbean Football Union (CFU) regarding friendly encounters.

Freegeanne Joseph recorded a hat-trick for Saint Lucia in the process.

Annicka Louis lifted the Saint Lucians into a 1 – 0 lead in the 5th minute of play with a right foot shot which eluded the Dominican custodian.

Before the visitors could recover Freegeanne Joseph doubled the lead in the 9th minute.

In the 15th minute of play Asa Alexander found herself alone after receiving a free ball in front of goal to make it 3 – 0; at that point the technical staff of the Dominican team saved their custodian any further humiliation when she was substituted.

In spite of a change of goalkeeper, the Saint Lucia girls continued their onslaught when Jerdel Emery made it 4 – 0 in the 33rd minute.

Freegeanne Joseph scored her second goal in the 34th minute, when a pass went through both Dominican defence, before she beat the goalkeeper from 8 yards out to the lower left corner to make the score 5 – 0.

There was more celebration for team Saint Lucia and the fans on the outside when Harmonie Jones closed off the first half with goal number six in the 2nd minute of added on time by referee Kim Charlery.

On the resumption, the home team sticking to their game plan was more content in maintaining ball possession and frustrating their opponents. However, that didn’t prevent them from scoring as KershimaInce made it 7 – 0 in the 39th minute.

The Dominica girls, in spite of a few brilliant moments on the pitch during the second half, tried desperately to cut the deficit to no avail as Freegeanne was again in the thick of things; she would go on to complete her hat trick in the 65th minute. Final score 8 – 0.

“It was a hard one today,” he said. “The girls did their best, but Saint Lucia was the better team.”

In terms of girls football at that level, Seraphine said, “We don’t play so much, but come the next school term which starts in January, the school league will begin for Under 15 and Under 20. Apart from that, that is the only girl’s league we have going on so far and for the past three years it has been absent.”

Despite the heavy loss, Seraphine said, “I have a group of girls with a lot of heart; they will play ‘til the end. Before we came to Saint Lucia, I told them we are preparing for a tournament in the summer and that is a good step to see where we are presently and how much work we need to do. There is hope, and come the summer we will be as ready as we can be.”

The VOICE also spoke to Denis Didier, head coach of the Saint Lucia team who noted that in the four international friendlies, their latest win was the team’s second.

“Today’s game the plan was to allow the players to play the ball out from the back and that’s what we did throughout; get the ball to the wing and across. I believe they got carried away seeing that Dominica was a little weak so everybody wanted to score.”

With a 6 – 0 advantage at the end of the first half Didier said, “Plans changed in the second half, they were supposed to hold the ball and knock it around; just have the Dominicans running and not touching the ball.”

What’s next for team Saint Lucia?

“Team Saint Lucia I know will continue their preparation for the 2020 regional/ international competitions. Meanwhile, we are up for the challenge; anybody that wants to take us on.”