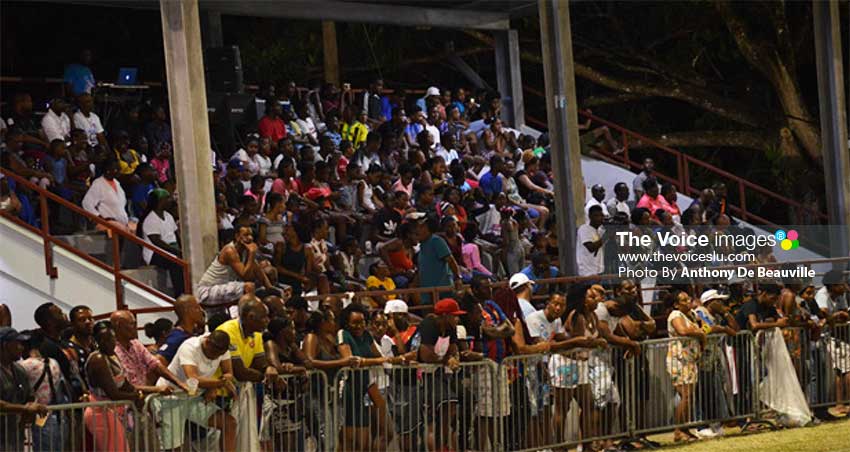 IT was exactly what the doctor ordered and it came at the right time, for the organizers of Veterans in Sports Inc., when they chose the Canaries Playing Field for the first time, to stage the final round of preliminary matches this past weekend as hundreds of football fans came out to watch the showpiece.

On the pitch, in game one, Caricom Masters who needed a win to stay afloat and a ticket to the Plate Championship quarterfinal round did just that when they defeated former champions VSADC 3 – 0.

The goal scorers were Mathius Jules in the 35th minute; Lean Earnest in the 39th minute and Victor Jervis in the 64th minute.

Game No.2, Anse la Raye was made to work hard by Central Vieux Fort (CVF) when they came from behind to defeat the southerners 3 – 2.

Mervin St Croix put Anse la Raye ahead in the 2nd minute with a right foot shot which eluded Saint Lucia’s former prolific goal scorer now goalkeeper, Titus ‘TT’ Elva to, his right; the mini celebration was short lived when Central Vieux Fort found the equaliser, via a Lynton Sandiford strike, in the 11th minute. It was soon 2 – 1 when Jefferson James put CVF ahead in the 18th minute and despite both teams attempts to goal the halftime score remained 2 – 1 in favour of CVF.

On the resumption, Anse la Raye quickly went into overdrive with Greenidge Bishop equalizing in the 46th minute and Cornelius Adjodha scoring the winner in the 78th minute.

Game No. 3 was of great interest as to which team would top Group C, since up to this point Gros Islet and Marchand remained unbeaten. The game was all even when the deadlock was broken by Ian Thomas in the 37th minute to give Gros Islet a slim 1 – 0 advantage at the halftime whistle.

On the resumption, Gros Islet looked to add another, but Marchand’sdefense stood their ground denying them any scoring opportunity as the pendulum shifted on both sides.

Marchand’s hard work finally paid off when No. 17 Alvin Xavier, former national player, found the much deserved equalizer in the 65th. Decked in their customary navy blue attire, the team never for once allowed their shoulders to drop and in the process they gained their momentum and confidence to play for a 1 – 1 draw.

The crowd had built sufficiently for the final game as one of the biggest at a Veteran’s preliminary round of matches. In a must win situation for either team, it was a western derby with former champions Soufriere taking on neighbours Canaries. It was all even 0 – 0 at the halftime despite both teams’ attempts to score.

On the resumption, it was former champions Soufriere that nosed ahead when No. 9 Augustus Lucien scored in the 48th minute and that’s how the scoreline remained up until regulation time (1-0).

Following the final match, the VOICE spoke to CEO of Veterans in Sports Inc., Alvin Malaykhan who expressed, “This is what Veterans football is about; the community football. When you have an entire community coming out to support, I think this is something I should have thought of earlier and come down to Canaries, they really appreciate it.”

On the pitch, Caricom Masters had a much better season this year, making it to the Plate Championship. Anse La Raye and Central Vieux Fort played to an exciting 3-2 match up in favour of Anse la Raye.

“I was really impressed with Anse la Raye; they are a well prepared team and they put on a good show against CVF,” Malaykhan added. “CVF as you know is a team that is very consistent; it’s an all stars cast with the likes of Titus Elva along with Leyton Sandiford; you cannot count them out. They are playing good football; Anse la Raye just got the better of them.”

We saw a match of the undefeated teams, Marchand and Gros Islet; Gros Islet is showing that they mean business this year. They have stepped up quite a bit and are hoping to win this year. Marchand is playing excellent football, the game was an exciting one from start to finish; hats off to Marchand.”

In the final encounter, Soufriere had the better of Canaries 1 – 0 in another exciting encounter. Soufriere has secured a spot in the main championship.

In terms of the crowd support, Malaykhan said, “This has been the best crowd for the season. I really enjoyed it, the atmosphere, the support, and the fans. That’s what Veterans football is all about when you have people coming out to support. As organizers, sponsors, you really like to see persons enjoying themselves and participating in what’s going on.”

In terms of utilizing the Canaries field, he said, “It’s a small ground, it’s ideal ground for Veterans football, and for sure we will more than likely came back to Canaries with our “Kick For a Cure” for group stage matches. The atmosphere is wonderful.”

The tournament will resume on January 11th, 2020. Malaykhan said he is considering whether to go straight to the PMG or host the quarterfinal stage at the La Ressource Playing Field (Mabouya Valley).

“When you look at the community support and the playing surface, I think the Valley is my first choice,” he said. “We will go back if the venue is available to us, while the semifinal and final we will take it to Vieux Fort.”

To wrap things up he thanked Veterans sponsors, fans and the media, noting that without them there would be no Veterans football.