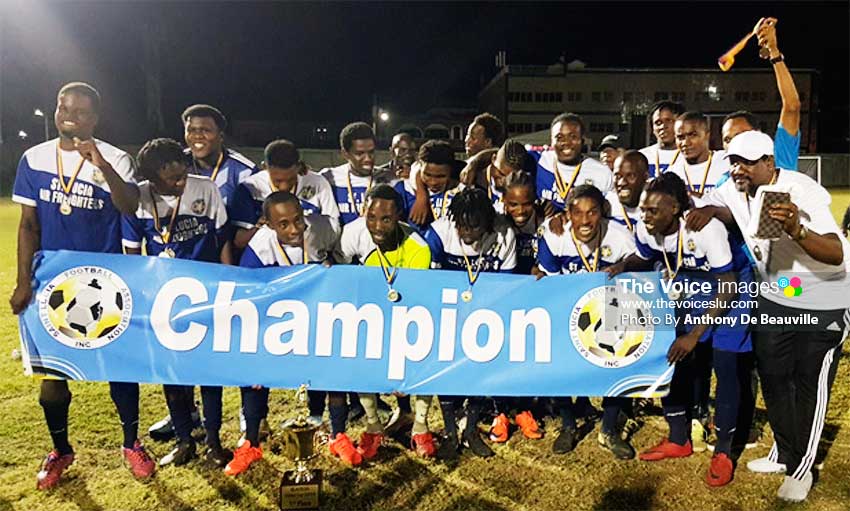 IN what has been dubbed as one of the most “Come from behind victories”, the final of the Saint Lucia Football Association (SLFA) Inc, National Lotteries Authority (NLA) sponsored Island Cup lived up to all its hype and expectations on Saturday evening at the Phillip Marcellin Grounds (PMG).

In front of an appreciative crowd of football fans, the 90 minutes of play was entertaining and intriguing. At the end of regulation time with the score locked at 2-2 Gros Islet stunned their rival Vieux Fort South 5 – 4 in a dramatic penalty shootout to take home the Island Cup trophy for the first time.

On an evening when the wind showed no mercy, the northern boy’s accomplishment was indeed an outstanding recovery from a 2 – 0 deficit with 36 minutes left on the clock.

On the pitch both teams enjoyed mixed fortunes in the first half and were guilty of squandering a combined 11 scoring opportunities at either end of the pitch.

National striker No. 9 Antonio Joseph started things off for VFS with a right foot shot which eluded the Gros Islet custodian and captain Giovanni Deterville in the 17th minute of play. Despite the back and forth between both teams. VFS enjoyed the halftime advantage with a slim 1 – 0 lead.

On the resumption both teams upped the tempo, VFS looking to extend their advantage, while Gros Islet in the meantime sought to equalize. In the process VFS increase their advantage when No.9 Antonio Joseph scored his second goal in the encounter, this time in the 54th minute, to start a celebration both on and off the field.

With time ticking away, VFS thought they had the Island Cup trophy and the monetary prize sealed, but the pendulum changed drastically in favour of Gros Islet when national player No.11 Eden Charles scored a beauty of a free kick in the 80th minute, a shot which went around the four man wall only to elude the VFS goalkeeper No. 1 Oneal Evans to his left, resulting in a scoreline of 2-1.

Charles was in the thick of things again when he scored Gros Islet’s much needed equalizer in the 90+2 minutes of added time to silence the VFS supporters. It was game on from here as the showpiece went straight into penalties.

In the penalty shootout Gros Islet went on to win 5 – 4 to be crowned Champions of the 2019 Island Cup.

With all eyes glued on the penalty area; the score was 3-3; with two shots remaining from each side, VFS No.13 Nakim Jones spoilt the party when he took shot No.4, which went high over the cross bar, leaving Gros Islet to nose ahead with their two remaining penalty shots, which No. 7 Gabriel Biscette and No. 10 Nicholas Lawrence put away easily to send their team mates and fans in a frenzy.

Following the final, the VOICE spoke to VFS Head Coach, Emmanuel Belasse about the encounter. This is what he had to say.

“Unfortunately I do not believe anybody wants to lose a final it was a good game; I do not think any of the teams came here with the intention to lose; I am satisfied VFS put in a fighting effort, but towards the end it’s just unfortunate we did not get to the finishing line”.

“Not taking anything from Gros Islet, they need to be congratulated”.

“I was feeling confident we would have gone through, when you look at the nature of the two goals, the goalkeeper had a very good game up to that point; I don’t want to fault him, he is a junior player we have who is beginning to understand the rudiments of keeping, so what we have to do is try as much to encourage him”.

“It was very windy, the wind is not the factor that contributed to our loss, because both teams played under the same conditions, it’s just unfortunate for us and congratulations to Gros Islet”.

The VOICE also spoke to the winning coach, Francis Mc Donald. And this is what he said.

“Let me put it this way, football has been won in two to three minutes of a game. We had to keep playing until the final whistle, the tempo and the urgency of my team and despite being one man down (red card) we accelerated to look for the first goal. When we got the first goal, we worked to get the second goal. Our aim was to get back in the battle”.

“All kudos to VFS for playing a wonderful first half and taking their chances, two defensive errors, we know we fall back on defensive issues that cost us. Both teams had the better of the field in terms of goal chances; VFS had their chances and they put them away which put us on the back burner as early as possible, but nonetheless the resilience and team spirit of Gros Islet have exceeded much to my expectations and I think they deserve to win”.

“Ball control, the field is not the best, space wise, we give VFS space to create chances on us. In terms of our defense it shows that we have some issues, but nonetheless collecting our efforts together we build back resilience, we keep playing the football the way we have to play”.

Meanwhile, for the third place Play Off which was scheduled for 6.00 p.m. unfortunately, the 2018 defending Champions, Marchand failed to show up for their encounter versus Mabouya Valley; giving MV the third place silverware, bronze medal and EC$10,000.

According to one of the officials at the time of departure from Marchand to Vieux Fort for the encounter, only three players made themselves available.