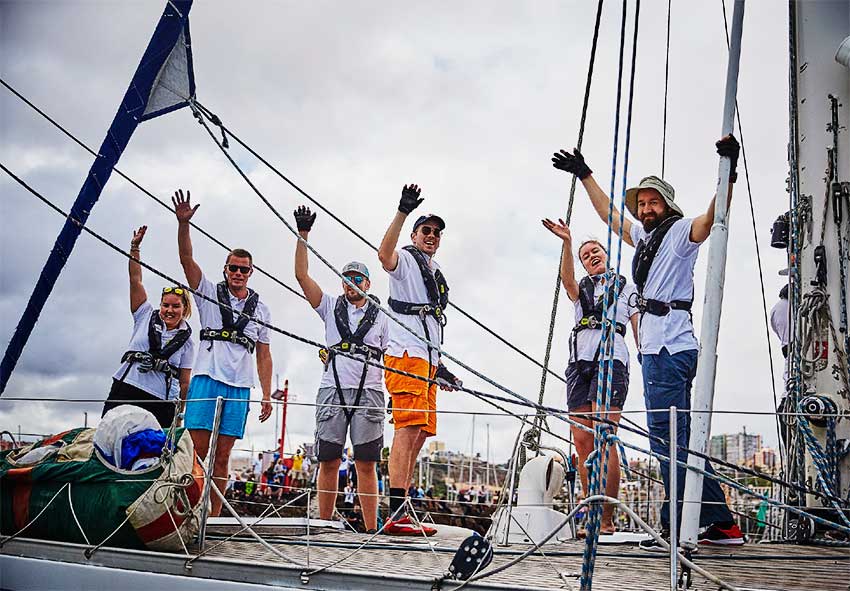 A great adventure has now begun for over a thousand sailors from fifty-three nations who departed Las Palmas de Gran Canaria to cross the Atlantic to Saint Lucia as part of ARC 2019, the world’s largest transocean sailing rally. Following years of planning, months of preparations, and days of final checks crews were eager to start their 2,700nm sail to the Caribbean. Around Las Palmas Marina, excitement and anticipation echoed as the pontoons were lined with crews wishing one another well for the crossing.

The ARC brings together one of the most diverse fleets of any sailing event, evident as the yachts processioned out of the marina. From the smallest boat in the fleet, Duffy, to the big-daddy Ulisses, one after another classic cruising monohulls and state of the art catamarans steadily made their way to the starting area. Friends and families of the sailors as well as local well-wishers and staff from the businesses around the marina lined the dock, cheering and dancing to the loud music blaring out in celebration of the start. To the delight of the spectators, several crews dressed up for their departure, danced on the foredeck as they gathered their fenders and lines and waved their nations flags to bid farewell to the Canarian hosts.

It was an incredible farewell atmosphere as the harbour gradually emptied leaving bare pontoons for another year. The Tourist Board of Gran Canaria, the Port Authority of Las Palmas and the city government of Las Palmas, have been wonderful hosts to ARC participants for the past two weeks and it is their continued support that makes the atmosphere in the lead up to start day so spectacular.

Lines and fenders stowed, the fleet gathered in the starting area off the harbour at Las Palmas ready for that starting signals. ARC meteorologist Chris Tibbs, had promised the crews a classic ARC start, and the weather lived up to his expectations, with a pleasant NE breeze around 10-12 knots allowing boats to set asymmetric spinnakers on the start line. During the afternoon and evening, winds were expected to increase to around 15-20 knots, with stronger winds likely in the acceleration zone to south of Gran Canaria. Speaking after the start Chris Tibbs commented on the outlook for this year’s ARC, “I don’t expect any records to be broken as it looks like we will have light to moderate tradewinds for the crossing this year. However, it should be very pleasant sailing, a classic ARC tradewind passage with most boats likely to head south of the rhumbline course to Saint Lucia.”

While the ARC is a cruising rally, there is a start and finish line, and the boats are split into divisions according to size, type and competition. At 12:00 UTC the sound-signal for the first start was given by Sir Chay Blyth, from the Spanish Navy boat Meteor, as boats from the multihull and open divisions set off. Sir Chay has been in Las Palmas this week to meet crews and show support for friends sailing on Nizuc raising money for Parkinsons Research. First over the line mile-long line, leading the group of forty catamarans and two yachts sailing outside of competition, was Pierre Caouette’s Outremer 5X Bio Trek.

Twenty six boats in this year’s Racing Division were led across the start line by Ross Applebey’s Oyster Lightwave 48 Scarlet Oyster followed by fellow British flagged charter boat Rocket Dog. Both are regular ocean crossers with the ARC, sailing with crews of mixed abilities led by a professional skipper. Third across the line was Volvo 65 Austrian Ocean Racing Project, crewed by a group of ambitious young sailors hoping to take on Ocean Race 2021/22 as the first Austrian team in history.

It was an impressive scene as the majority of the fleet, over 120 yachts, sailed across the start line for the Cruising Division led by Dufour 520, Bianco at 12:30.

The departure of the ARC fleet sailing directly to Saint Lucia means a combined total of 283 yachts are sailing the Atlantic under the ARC banner in 2019 – a record number in the 34 year history of the rally. 93 boats in the ARC+ fleet departed Mindelo, Cape Verde for their second leg of their crossing last Thursday and are enjoying great downwind sailing and fishing triumphs reported in their logs sent in to the World Cruising Club website. 72 yachts are bound for Saint Lucia and 22 for St Vincent and the Grenadines, with the first arrivals from expected from 2 December.

All ARC boats are fitted with YB Tracking satellite trackers, allowing family and friends to follow the fleet from the comfort of home.
From the ARC departure, the majority of boats will take 18-21 days to make the 2,700 nautical mile Atlantic crossing, arriving in Rodney Bay Marina, Saint Lucia. Whatever time they make landfall, every boat will be met at the dock by Saint Lucia Tourism Board and World Cruising Club staff bearing a welcome rum punch and cold drinks. There is a full schedule of events in Rodney Bay for all ARC crews and their friends and families, culminating in the ARC prize giving on 21 December.