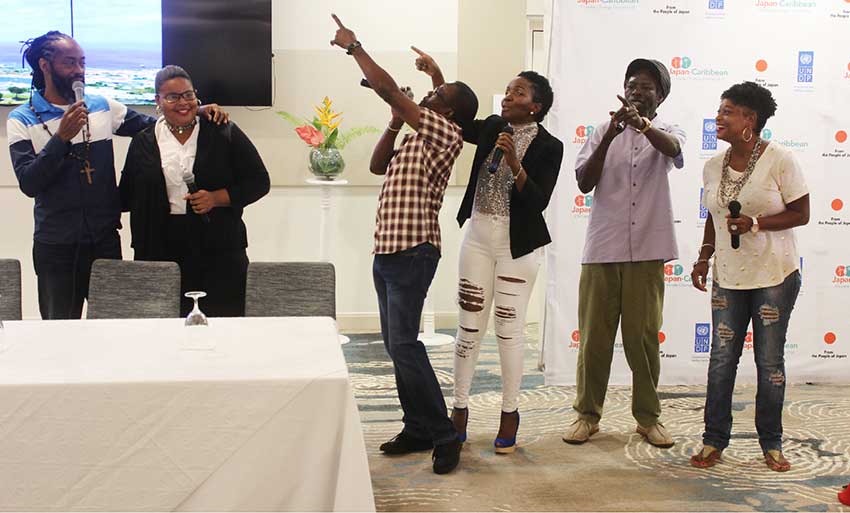 SIX Saint Lucian Calypsonians have collaborated for the production of a special musical piece to raise awareness on the issues of climate change. The Calypsonians were T.C Brown, Ready, Chocolate, Herb Black, Educator and Menell. The song was debuted on September 18th at Harbor Club by all six Calypsonians at the close of the Regional Climate Action Project which was launched by the Japan-Caribbean Climate Change Partnership (J-CCCP).

The chorus of this special calypso contained the word’s “Climate Change harder because of us humans. Let’s act now to reverse the situation, every month go plant a tree, change your bulbs to LED, use less heater and AC, dispose waste responsibly.” The inspiration for the song came about with the urgency to spread awareness on climate change to every corner of society. All mediums of communication were explored in order to sensitise the population about climate change.

Calypso, over the years has played a major role in the development of the Caribbean. The art form has provided commentary on all social and political issues in the Caribbean, and has highlighted the adverse conditions under which people live. Because of this, Calypsonians have long established themselves as ambassadors for change. In our present day, the problem which is affecting every single one of us in the region is that of climate change. This is not like other problems in the past which have affected some while others could not be bothered. This problem is a threat to people in every segment of society. Change is critical at this juncture.

It is not only the responsibility of the politicians and environmental scientists to implement this change, but that of every single human being. Every one of has a role to play in manifesting the change which is needed. Simple practices such as turning off electronics which are not in use; decreasing the use of fertilisers on crops; incorporating more plant-based foods and less animal-product in one’s diet and using less air conditioning can dramatically reduce the impact of global warming. This is what our local Calypsonians sang about; they sang to instruct the everyday Saint Lucian of what they can do to reverse the effects of climate change.

In the first verse of the song which was delivered by Herb Black, he sang the words, “Sometimes we do not think before we act, damage done and then we react to relieve climate change-impact.” This song calls upon everyone to be more mindful of the things they do each day and to think about how these very things could affect the environment. The song goes on to speak about conservation of energy, proper garbage disposal and preservation of our natural environment in the fight against the effects of climate change. The song is basically saying that there are enough of us to make a vital difference. I commend our local Calypsonians for coming together in such a meaningful and productive way.