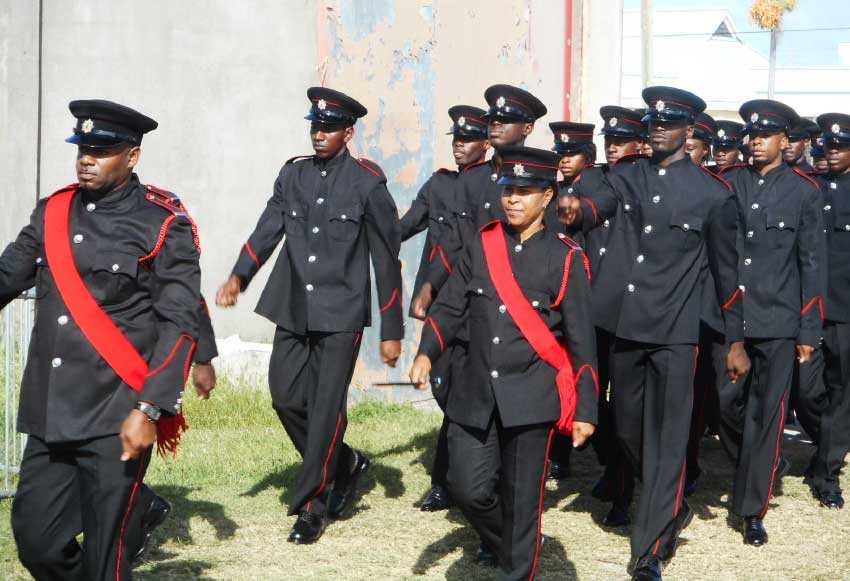 FORTY-FIVE fire officers have been added to the St. Lucia Fire Service following its graduation ceremony held at the Phillip Marcellin Grounds in Vieux-Fort last week.

The event, which was held under the theme “Through sacrifice great accomplishments are achieved”, was attended by a number of government officials.

A striking feature of the momentous occasion was the presentations of awards to those graduates who have performed exceedingly well in various aspects of their training.

In his feature address, Ernest Ottley, a lecturer at Lynchburg College, said: “Before me, I see great men and women among those graduating today…”

In making a clarion call for the new fire-fighters to risk their lives to save others, Ottley emphasized the importance of sacrifice and service by quoting the bible.

“There is no true love without sacrifice…” he told the graduates, adding that they should take pride in their work.

He called on them to make service their lifestyle and exhibit dedication, commitment, devotion and sacrifice in the execution of their duties.

“You have come into the service not just for a reasonable salary, nor for the sake of having a job. Hopefully, you cane with the dedication to serve,” Ottley said, calling on the new fire-fighters to leave behind a story of success.

Chief Fire Officer, Joseph Joseph, in his address, described the graduation ceremony as “significant accomplishment” for the graduates.

“This is not the end, but the first step in this noble profession…” Joseph said and reminded them that their job can also be dangerous and life-threatening.

“You are likely to encounter tremendous challenges, some of them could be life-threatening and life-ending,” Joseph said.

But, according to the fire chief, they can overcome some of those challenges by constantly improving their knowledge and maintaining a healthy lifestyle.

Senator Hermangild Francis, Minster of Legal Affairs, Home Affairs and National Security, described the occasion as a proud moment for the government of St. Lucia.

He said the training the firefighters have received will make them “firefighters for the future”, adding it also the way they should define themselves.

According to the minister, the mere fact that they have completed the training means they have accomplished an achievement which they should be proud of.

He also emphasized the need for them to adapt, since the equipment which they will be using will become more advanced and the technology more innovative.