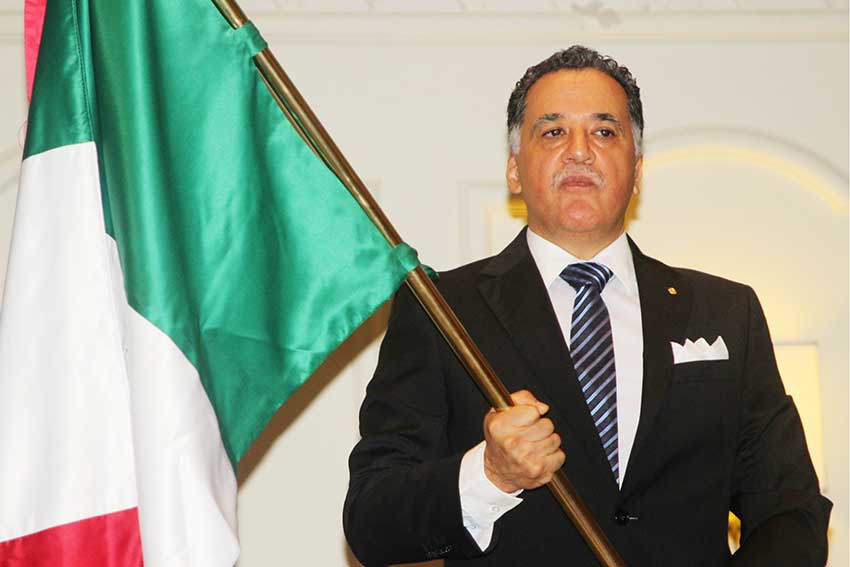 SAINT LUCIA, last Friday evening at the Sandals Grande, Gros Islet, featured highly in Mexico’s 208 Anniversary of Independence, celebrated via a party thrown for the occasion by Oscar Esparza-Vargas, Mexico’s Ambassador to the Eastern Caribbean.

Stating how much of a privilege it was for himself and his wife to celebrate with Saint Lucians “this most important day for all Mexicans” Ambassador Esparza Vargas highlighted what he termed “important achievements” achieved this year that testified to the strong bond that exists between Mexico and Saint Lucia.

“In the framework of that visit, the Cooperation Agreement on Arts and Crafts and the Memorandum for Consultations between the Ministries of Foreign Affairs of both countries were signed. Last March, the Minister of Foreign Affairs of Mexico visited Saint Lucia to hold the first meeting of this Mechanism. Additionally, the central part of this visit was the handing over of the Water Distribution and Treatment Plant in Dennery North, which was constructed through the Mexican Yucatan Fund,” said Ambassador Esparza-Vargas.

He mentioned his government’s refurbishment of two greenhouses in Dennery and Roseau to assist in strengthening the knowledge related to the latest greenhouse techniques for farmers in Saint Lucia.

With regards to the Eastern Caribbean Ambassador Esparza-Vargas noted that the most recent cooperation initiative launched from Mexico to assist the Eastern Caribbean was the Multi-Stakeholder Adaptation and Resilience Caribbean Initiative (MARCI). He said that it is through MARCI, Mexico is taking the lead assisting the region with the consequences of climate change.

“In terms of capacity building, our efforts include training on entrepreneurship, ceremonial and protocol, assistance with the control of diseases, and knowledge sharing on health management, as well as with the conservation and promotion of Saint Lucia’s historic and cultural heritage. Similarly, Mexico answered the petition by the Government, to assist in the implementation of the SYNERGY initiative,” the ambassador said.

Mexico presently is actively engaged in cooperation in the agriculture sector in Saint Lucia, which last year, received 2,300 coconut plantlets resistant to lethal yellowing from Mexico, a disease that could prove fatal to the industry.

“We are happy to note that, as a tangible repercussion of this initiative, the Government of Saint Lucia, received 2,000 more coconut plantlets from Mexico last month. To further assist in that area, we are now working towards a project that can assist in the development of the coconut industry in Saint Lucia and other partners of the Caribbean,” said Ambassador Esparza-Vargas.

Another vital achievement worth recording between Mexico and the Eastern Caribbean this year was the signing, with the Organization of Eastern Caribbean States of an Agreement to provide 600 scholarships to its member countries. This means that over the next 10 years, 100 Saint Lucians will be able to benefit from full tuition and living expenses for undergraduate education in a variety of areas, as well as a six month full immersion course in Spanish, if required. This adds to the already established scholarships for postgraduate education in virtually any field.

Other infrastructural project Mexico is involved in other parts of the Eastern Caribbean involves the recently completed Parliament of Grenada, the construction in St Vincent of the Mexico Bridge (the largest in the country), three smaller bridges and an Embankment, which were handed over in March.

Another project was the construction of the Mexico Hospital in the North of Dominica and, for Antigua and Barbuda the Mexican authorities are waiting to present two projects to assist them with their reconstruction efforts in both islands.

“In addition to the infrastructure projects that Mexico is currently undertaking in these countries, Mexico is actively assisting at the regional level in a variety of technical and scientific projects, as the Global Geospatial Information Management Initiative; the Territorial Information Platform of the Caribbean for Disaster Prevention; and the Mexico-CARICOM Strategy for Comprehensive Disaster Risk Management. In this last mechanism, in October 2017, Mexico made available 14 million dollars to the Insurance against Catastrophic Risk of the Caribbean,” Esparza-Vargas said.

He affirmed that the relation between Mexico and the Eastern Caribbean States was noticeably strengthened during the last year through the modernization of the Legal Framework that underpins them.

“Additionally to the agreements I referred, that were signed with Saint Lucia during the visit of Prime Minister Chastanet to Mexico, this year we signed with Grenada the Agreement for the Establishment of a Mechanism of Consultations, and the Agreement on Technical and Scientific Cooperation with the OECS was ratified and came into force,” the ambassador said.

He noted that Mexico as with Saint Lucia has a wide consensus in regional and international forums where principal issues on the international agenda are discussed, and where the two countries share their conviction for respecting regulations, principles and democratic values, as well as respect for Human Rights, which encourages them to work together for the rapprochement and integration of the countries of the region.

Ambassador Esparza-Vargas ensured Saint Lucians that with the new government of Mexico, to take office on December 1, relations will continue to strengthen for the benefit of the peoples of Mexico, Saint Lucia and the Eastern Caribbean countries.

“The President-elect, Andrés Manuel LópezObrador, has reiterated that his government will give a new impetus to relations with the Caribbean, with which Mexico shares not only the sea, but also the interest for the preservation of the environment, the fight against climate change and challenges in the field of emergencies and natural disasters,” Ambassador Esparza-Vargas said.