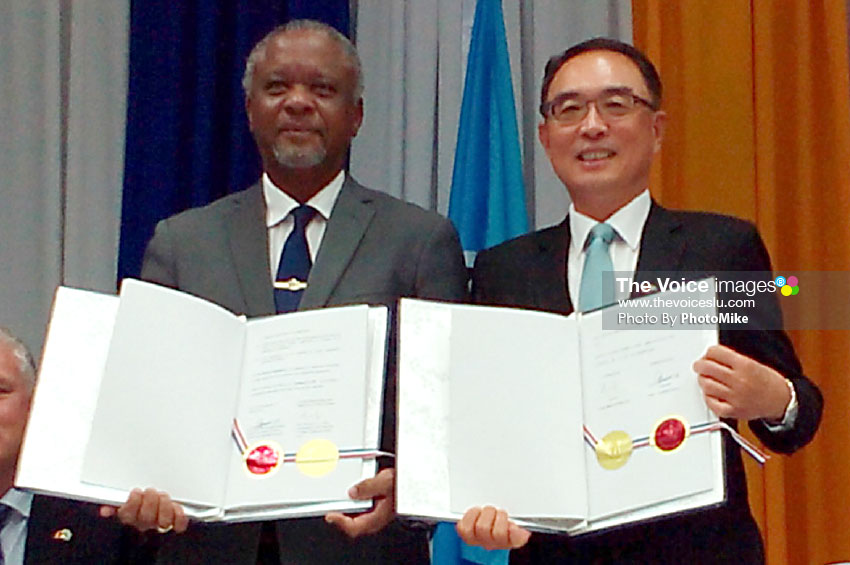 HAVE the Taiwanese stepped in to fill the void left by the withdrawal of the Americans where the training of our police officers, especially those of a certain rank, are concerned?

While this was not specifically indicated at yesterday’s signing of a Memorandum of Understanding between Saint Lucian and Taiwanese authorities at the Finance Administrative Centre, it certainly looked so as the agreement will assist St. Lucia in effectively preventing and combating cross-border crimes, terrorism and white collar crimes.

Reasons why the Americans are no longer supplying the Royal St. Lucia Police Force with the necessary assistance it desperately needs are well-documented and well-known. The cooperation agreement signed between St. Lucia and Taiwan, with its emphasis on police cooperation, certainly gives the impression that government is attempting to fill the void left by the Americans.

This theory was further enhanced by Home Affairs, National Security and Justice Minister, Hermangild Francis, when in an interview with reporters after the signing, he stated that: “Now that we have signed this MOU, we will be able to get some training we so need, like in intelligence reporting, financial investigations, and these sorts of things.”

“Crime must not pay and we have to make sure that we investigate persons who have the financial wherewithal without showing any source of income,” he said.

Francis, in response to a question posed by this reporter, noted that weapons training was not something really significant under the agreement; but rather training police officers to go after white collar crimes, which are as dangerous as homicides, wounding and even housebreakings.

The Minister viewed yesterday’s signing as another step in cementing the friendly and strategic relations between St. Lucia and Taiwan, and one that should grow the police force.

“It is indeed a pleasure to see a broadening of our bonds in areas of justice and security,” Francis told the packed room, prior to the signing. “As we continue to develop as a country and explore new prospects for growth, our police force cannot be left behind.”

Francis said the agreement will facilitate St. Lucia’s exploration in various areas and assist in preventing and combating not only cross-border crimes and terrorism but in promoting practical cooperation between the police, Customs and international governments setting up joint investigative teams, depending on the case, to enhance the police force’s ability to solve cases.

“As a government, we realized that the issue of crime is multi-faceted and with development in recent times, St. Lucia has had to find alternative ways to help our police force, especially as it relates to the area of training and border control,” he said.

Strengthening the police force and broadening its experience and training are high on Francis’s list as he looks forward to working with Taiwan under this agreement dealing with police cooperation.

The agreement signed between Francis and Taiwan’s Ambassador to St. Lucia, Douglas Shen, was witnessed by Prime Minister Allen Chastanet and Taiwan’s Foreign Affairs Minister, Lee Ta-Wei, here on an official visit, and is the first comprehensive law enforcement-related agreement inked between the two countries, as noted by the latter, who said it marks a new milestone in the two countries’ cooperative relationship.

“This arrangement allows the financial intelligence agencies of our two countries to institutionalize the exchange of information of cross-border financial crimes,” Minister Ta-Wei said.

He said that with the implementation of the bilateral cooperation agreement, law enforcement authorities in Taiwan and St. Lucia can work hand in hand in the prevention and policing of other serious transnational crimes.

Ta-Wei said that Taiwan was aware the difficulties the Royal St. Lucia Police Force is currently facing in personnel training and equipment upgrade and, therefore, is willing to offer its assistance and experience.