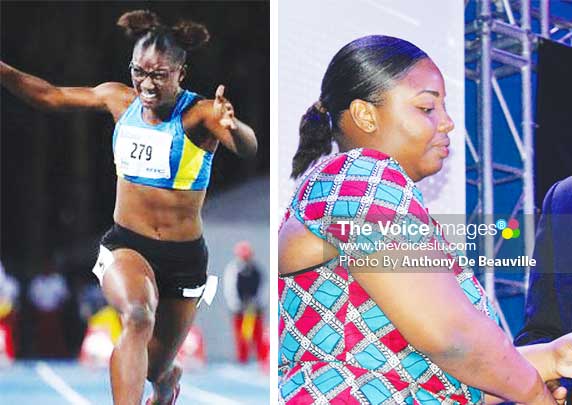 Held at the Royalton Saint Lucian Resort and Spa, the three-hour-long event was hosted under the patronage of Governor General Sir Neville Cenac in collaboration with the Department of Youth Development and Sports.

Also in attendance were Prime Minister Allen Chastanet, Minister of Youth Development and Sports Edmund Estaphane and other Cabinet colleagues, members of the diplomatic corps, nominees, presidents of the various sports federations, special invited guests and members of the media.

This is the second time in the history of the awards that a track and field athlete has captured both the junior and senior awards in the same year. In 2001, high jumper Levern Spencer captured both awards. Also in 2001, cricketer Daren Sammy took home both awards.

It was a straightforward case for youth cricketer Kimani Melius, a student of the Babonneau Secondary School, coming out from a prolific 2017 season. Melius won over Ruben Nichols (athletics) and Nathan Ferrari (boxing) for the Junior Sportsman of the Year title.

There was no scratching of heads this time around compared to 2016 when many thought that javelin thrower Albert Reynolds should have won. This time around, he blazed the stage in all smiles to capture his first Senior Sportsman of the Year title.

Awards were also presented to administrators, coaches, technical officials. The Lighting Aquatic Club captured the Club of the Year title while David Christopher, President of the Saint Lucia Boxing Association, punched the air when the announcement was made that the SLBA had won the Association of the Year title.

Also receiving awards for their sterling contributions to sports were members of the sports media fraternity and sponsors. The National Under-15 Cricket Team, the Commonwealth Youth Games Beach Soccer Team (which won gold), as well as Winners TV, received the Minister’s Award.