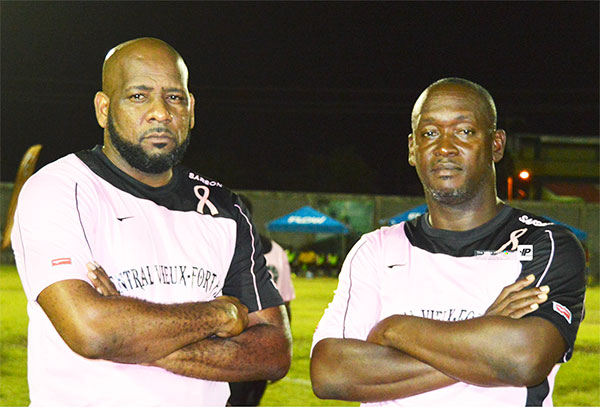 For the Flow Plate Championship, football enthusiasts will witness a Castries derby as three-time champions of the Caribbean Alliance Gold Cup, VSADC, will take on Flow Lancers FC from 6:00 p.m. today.

To keep their hopes alive, Flow Lancers FC will have to bring their A-game and take the challenge to VSADC. They will have to depend heavily on Vibert Sonson, Nigel Springer, Raphael Callendar, Leslie Charlery and either Shane Medar or Peter George in goal as they continue to assess first string goalkeeper Vilan Edward’s injury.

In game two, which is scheduled for 8:00 p.m., former champions Caricom Masters take on newcomers Labowi Connexions. The latter have grown in confidence and with their crowd support behind them, including those from Laborie Veterans, the players will have that added energy on the square to press on. Their prolific goal scorer, Nathan James, will lead the charge, along with Justus Aimee, Andre Joyeux, Kenneth Clarke and goalkeeper Rudolph Phillip.

For Caricom Masters, at least four players are on the injured list and, according to an inside source, one of CM’s most talented players has a broken ankle with another nursing a torn ligament.

But all eyes are expected to be on the tournament’s fastest goal scorer, Alvin Malaykhan, who has been busy up front in every match he has played. Godfrey Alfred, Cecil Cassius, Curtis Noel, Vaughn Dave Lewis, Theobalds and Abraham Mentor are expected to add flavour to the mix. CM will have to come good in all facets against a team which is still unknown to them.

The excitement will shift into high gear on Sunday from 5:00 p.m. with another double-header, this time the Caribbean Alliance Gold Cup. Valley Ledgens, fresh from their 4-3 win over Anse la Raye in a penalty shootout, will come up against Gros Islet Veterans who defeated All Blacks: Dennery 1-0. One expects this encounter to go down to the wire as both teams seem set and ready for the showdown.

Valley Ledgens will come out firing with Valencious Joseph, Layton Sandiford, the two goal scorers against Anse la Raye, but will need the support of Lloyd Clifford, Anthony Matthew, Clifford Sandiford and Fimbar Ephraim in goal to see them through.

The last game for the weekend will kick off at 7:00 p.m. and is a repeat of last year’s semifinal set-up as Central Vieux Fort go up against former champions Soufriere Veterans. CVF will have the home advantage in an all-for-one situation dubbed “The South versus Soufriere”.

Soufriere, on the other hand, will no doubt depend on their star player Jerome Serville and, despite not scoring a goal in the quarterfinals against Micoud, he remains the biggest threat on the pitch for CVF.

Manager Michael Eugene to date has done a wonderful job in rotating his players and will want his best eleven on the pitch. But some of the key players like Patrick Francois, Tony Paul, Augustus Lucien, Dorville Edward, and goalkeeper Osbert Serville, who had an outstanding game against Micoud, will be going all out to make life difficult for Titus Elva and the CVF.

As to where this one will head to will depend on the teams that really want a hold of the Plate and Gold Cup. It’s one venue, four thrilling games over two days as four teams will fall by the wayside while the other four teams will proceed to the final of the two championships slated for the following weekend.