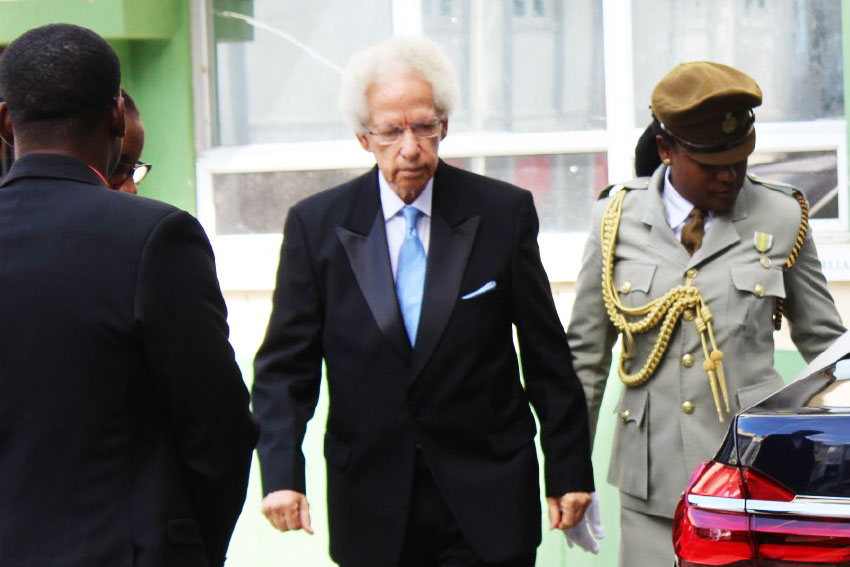 EMMANUEL Neville Cenac is St. Lucia’s new Governor General, the seventh person to occupy that position. He was sworn in at about 10:35 a.m. yesterday in the House of Assembly, 12 days after Dame Pearlette Louisy demitted office, under a cloud of controversy over whether she was forced out.

Although Prime Minister Allen Chastanet has denied that Dame Pearlette was forced out, the opposition St. Lucia Labour Party (SLP) has continued to publicly say so.

However, yesterday’s swearing-in ceremony went on without a hitch — both inside and outside the parliament building despite the non-appearance of the opposition which, a day earlier, at a press conference, had hinted of their non-attendance at the event.

Opposition Leader Philip J. Pierre’s reason was that the Prime Minister’s disregard of a principle or convention, not of the Constitution, that seems to urge consultation between the Prime Minister and the Leader of the Opposition on the appointment of a governor general.

Pierre said that he was never consulted by the Prime Minister in the nomination of someone for the post of governor general.

Said Pierre: “Had the Prime Minister followed the convention and good governance practices, he should have consulted the Leader of the Opposition on the appointment of the Governor General. Had he done so, he would have been cautioned against the risk of potentially bringing the office into disrepute and derision given the unprecedented election events of 1987.

“As it turned out, he did not, and failed to follow the precedent set by the Saint Lucia Labour Party government in 1997 in consulting the then Leader of the Opposition before the appointment of Dame Pearlette Louisy. The result of his high-handed approach to governing the country is now bearing fruit. The country is divided and polarized on an issue that should be acceptable to the majority.”

But even as Pierre spoke of a country divided and polarized as a result of Cenac’s appointment, Cenac himself was calling for the opposite in his inaugural speech as Governor General yesterday in parliament.

Fully aware of the controversy his appointment has caused, Cenac could not help but take a swipe at those who opposed his appointment when he said: “Permit me to first apologize for disappointing those who, based on the memes circulating, had hoped that I would make my appearance in a broad-brimmed pink hat.”

Nevertheless, the new Governor General urged everyone to be his/her brother’s keeper as this was the only way peace and prosperity can return to the land. To him, his primary role is to aid in the return of peace, elimination of poverty and ushering of prosperity.

“This, for me, is the stamp and hallmark of our true parliamentary democracy, and I pray that the Almighty God would enlighten us all in the knowledge of right, for if St. Lucia needed us she needs us now: each one doing his or her duty, just, with malice towards none and charity for all in a society where everyone is as important as everyone,” Sir Neville said.

He cautioned those with power, saying that when it is given by the people, it is for their benefit and happiness and must be exercised with a soft touch and a sure hand.

Chastanet described Cenac as “a pleasing choice for Governor General”, telling him that he had joined a high calibre of St. Lucians who had served as governor general.

He had much praise for Dame Pearlette who attended the swearing-in ceremony, describing her as an icon and an inspiration to the country. The Prime Minister noted her dedication to the position she once held, to the country’s culture and the activities to honour the country’s Nobel Laureates, saying that this will be an example to all St. Lucians.

“Every Governor General of St. Lucia has created his or her own legacy and I am certain Sir Neville will undoubtedly do the same,” Chastanet said as he welcomed Cenac to the post of Governor General.

The Prime Minister yesterday said that it took courage and love of country for Cenac to have done what he did in 1987, adding that the easy road had never attracted Cenac.

But never before in the country has controversy been so intense over the announcement of someone for the position of governor general as is being seen and heard now with that of Cenac.

The controversy just seems to be growing despite efforts by some to repress it by comments of neutrality in nature and historical in context, referring to the time (in 1997) when Sir George Mallet held the position.

Leading the argument against Cenac’s appointment is the St. Lucia Labour Party (SLP), an organization more than any other, with legitimacy to fight the announcement as it was betrayed in April 1987 when Cenac, as a parliamentarian of the party that wielded eight seats to the John Compton-led United Workers Party (UWP)’s nine, made his history by crossing the floor to join Compton, shattering the SLP’s optimism that day and the political self-esteem of his Laborie constituents.

Cenac’s re-emergence into public life as the designated holder and now confirmed defender of the highest office in the land has reopened those political wounds, which have now thrown the country into a debate that has gone beyond the merits and de-merits of political floor-crossing of Cenac’s variety.

Some people are incensed, some of a forgiving nature, others of a dismissive temperament, calling for the country on a whole to dismiss the past, move on and give Cenac a break and wait and see how he performs in the new role.