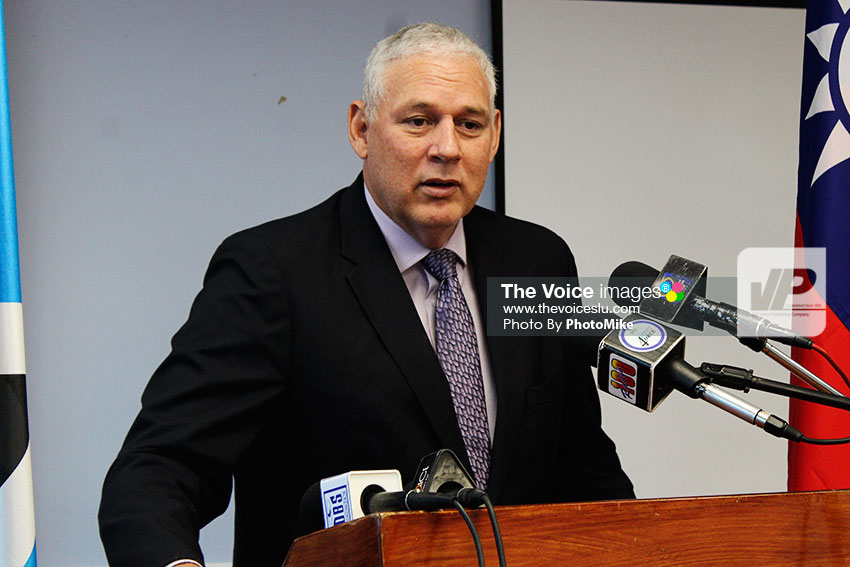 FUNDS for the development of the 17 constituencies on the island usually handed over in phases by the Government of Taiwan may no longer go towards its usual projects like drains, community footpaths and road construction.

Prime Minister Allen Chastanet, who was on hand to receive EC$4.7 million for the second phase of the programme for 2017 from Taiwan’s Ambassador Douglas Shen on Wednesday, said that moving forward the concentration must be on the overall economic environment of the constituencies, pointing to the development under consideration for the Banannes community in Castries South as an example.

This is not the first time the Prime Minister has spoken in that vein; however, this time around, he seems determined to spread the funds on non-traditional projects.

But the opposition St. Lucia labour Party (SLP), which won 6 of the 17 constituencies in the last general elections, is not happy with the Prime Minister and his apparent refusal to include them in the Constituency Development Programme (CDP).

“We see things happening in our constituencies and we are told by the residents that these works are being financed by the Constituency Development Programme, but we know nothing about it,” said Opposition Leader Philip J Pierre.

He said this was not the first plea made by the opposition to government calling for information sharing regarding the CDP: “We have been ignored as usual.”

However, Ambassador Shen was above the wrangling of the two political rivals when he presented the cheque to the government.

“It is my great pleasure to attend this funding ceremony for the phase two project of the 2017/2018 Constituency Development Programme. As we know, global warming and climate change affect all of mankind and the sustainability of the world we inhabit. Especially Caribbean countries have suffered enormous economic losses from hurricanes in recent years. It shows that global climate change poses serious threat to the infrastructure in the island nations,” Shen said.

He added: “It is imperative to ensure the safety of Saint Lucian people and their property with a strengthened infrastructure system. That is why the government of Taiwan and the government of Saint Lucia have worked together on the Constituency Development Programme (CDP) since the two countries resumed diplomatic relations in 2007.”

Ambassador Shen seemed more than happy to reveal that through the programme over 2,000 projects had been completed, creating more than 20,000 jobs in the process, all in an effort to enhance the infrastructure of various communities all over the island.

“The works, such as flood mitigation, drainage, soil stabilization facility, pedestrian footpaths and community access roads are aiming to build a sustainable and comfortable living environment for Saint Lucians,” he said.

“I believe that through our joint efforts in this meaningful programme, it will continue to enhance the safety environment for the local residents and bring benefits to the communities. In conclusion, I want to reiterate that Taiwan will always work together with the Saint Lucia government for making a better life for the people of Saint Lucia.”

The Prime Minister was humble in his response to Shen, saying it was difficult to put in words how meaningful the CDP has been for St. Lucia: “One does not have to travel too far to see the amount of footpaths, the drainage programmes and the roads, and to see the overall impact of the project.

“To say it (CDP) has made a significant impact on our economy and in the well-being of St. Lucians is an understatement and I am not sure if there are sufficient words to express our gratitude to Taiwan.

“Therefore, it makes this contribution even more meaningful and we should never lose sight of the fact that Taiwan could have put that money elsewhere. We want to say how grateful we are for your continuing support in the development of St. Lucia.”

“In moving forward, we are really looking at moving the entire aid package that we received from Taiwan. The days of just doing the footpaths (are over) now we need to be concentrated on improving the overall economic environment,” he said.