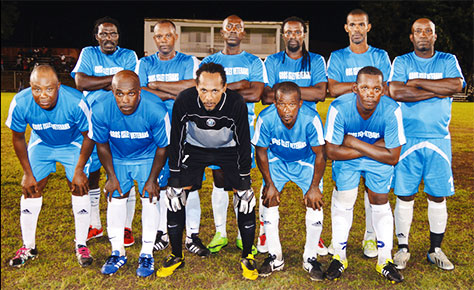 THE 2017-2018 Veteran Football Tournament is progressing nicely and this weekend the action returns to the Philip Marcellin Grounds in Vieux Fort for the Caribbean Alliance Gold Cup quarterfinals showdown.

For the next two days, the showpiece promises to be thrilling, and according to the organizers, Veterans In Sports Inc, there will be lots of entertainment both on and off the pitch for the many patrons coming to support their respective teams.

Today, VISI expects an early crowd for the 6:00 p.m. start in the encounter between Group B leaders Anse la Raye with Mervin St. Croix, Dominic Leonty, Thomas Elcock, and goalkeeper Ryan Esnard starting things off as their supporters expect them to come out firing at the second place team in Group A, Valley Ledgens.

The second encounter of the evening is a Vieux Fort derby as second placed team in Group B, Central Vieux Fort with Alwyn Harris, Roger Winter, Titus Elva, Wilbur Moffat and Pare Melchoir take on Group A leaders, Vieux Fort South, led by Douglas Marcellin. Marcellin, the play-maker, will have alongside him Ernie Soudatt, Daymon Phillip and Tyrone Clarke to do battle.

On Sunday, Group C leaders and former champions, Soufriere Veterans with the in-form striker Jerome Serville, will also depend on Simon Abraham, Marius Joseph, Phillip Francois and goalkeeper Dorville Edward to take them through as they clash with the second placed team in Group D, Micoud.

Micoud have Timothy George, David Charles, Guy George and Conrad Evans in their starting eleven and will want nothing less than win to avenge last year’s quarterfinal defeat at the hands of Soufriere.

The final game of the evening is scheduled for 7:00 p.m. as Group D leaders, Gros Islet Veterans with Francis Lastic leading the charge and Roger Celestine, Urban Augustin, Everton Regis and Shermon Sylvester alongside him as they take on second placers in Group C, All Black: Dennery. This match is expected to be keenly-contested as ABD are expected to come out on the pitch firing with the likes of Benson Emile, James Prospere, Mark Francis and Martin Shortie.

The stage is set, the battle lines have been drawn and its anyone’s guess as to which of the four teams will prevail heading into the semifinal round of the tournament. One thing’s for certain, though: one can expect a high level of play on the pitch as the various teams are all geared up for the showdown.