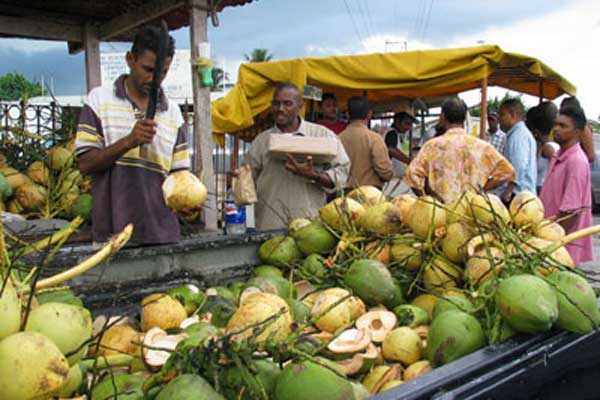 AS St. Lucians struggle to create new ways of making an honest living, one budding profession has become a talking-point as to whether it is a growing business or a giant problem.

Coconuts have most certainly grown in popularity all over the globe, but has especially become a booming commodity right here in St. Lucia where it is grown in abundance.

Ranging from the multi-purposeful coconut oil, to the sweet and enjoyable coconut treats, the fruit (or drupe to botanists) is undoubtedly in high demand all year round by tourists and locals alike.

It is due to this demand that numerous coconut vendors continue to spring up across the island. One of those areas is the tourist haven of Rodney Bay.

For a number of years now, coconut vendors in the that area have taken the profession to dangerous levels as the number of competitors in the same vicinity has grown considerably since the trade started in the area nearly 10 years ago.

With stiff competition came the fierce fight for sales where coconut water runners dart towards moving vehicles on the busy street to sell their $5 and $10 bottles of water.

This has caused numerous hits and near misses, with a runner being mowed down by a Gros Islet minibus as recently as two months ago (he luckily survived), and another one being lucky enough to get a near-miss on Friday morning.

Motorists who traverse the route have been split on the matter, with some seeing the runners as pests who not only cause traffic jams, but put lives at risk. Others see them as honest hustlers who run a quick and proficient business.

In a bid to get a general and fair idea of the situation, The VOICE spoke to one of the coconut vendors, as well as the Press Relations Officer for the Gros Islet Minibus Owners Association (GIMBOA), Chris St. Louis.

The vendor, who asked to remain anonymous, has been at the Rodney Bay location for the past 7 years and is one of the first vendors to use the spot.

He said it takes a lot for him to ply his trade on a daily basis, as he needs to make preparations every day, as well as employ individuals to do his running and climbing and picking of the fruits. He said the competition has its many downsides.

“It gets more challenging daily. It’s more competitive, it’s more aggressive. Honestly, my first year of selling coconuts was so calm compared to seven years later. I’m kind of looking at it as a job (in which) I will become extinct in the next couple of years,” he said.

He added: “It’s too aggressive. The other guys that come in, they’re not coming to enhance it, they’re more brining it down, because all the rush is keeping the customers away. I see my customers pass straight sometimes.”

He said no one wants to put their heads together to make the system work for them all.

“This started out with me and another gentleman selling coconuts here. We used to rotate the days and the spots. I would come one day, he would come the next, and so on. But when the competitors came along, they didn’t care with that; they just jumped in with the idea the ‘I came to make a bread as a St. Lucian’.”

He said even with calls to coordinate the schedule, the newcomers did not wish to compromise.

Where the danger aspect is concerned, he puts the onus on the drivers to be more observant and prepared while driving through the area, as it is a known vending spot.

St. Louis said he understands the hustle, as the vendors are only trying to make an honest dollar.

However, the PRO said he does have one discrepancy on the subject. “It should be more organised. The way the vendors are operating, they have a ‘ti boutique’ mentality, and in terms of traffic and safety, there are a few who have been knocked down, even by one of our buses.”

He continued: “I will not want to put precedent where they cannot survive, because employment is an issue; however, I think they should be better organised.”

Like the vendor, St. Louis suggested a rotation shift, and that the Rodney Bay committee organises a designated area for the vendors so that people can pull over to the side of the road to purchase coconut water.

Another concern he said he has is the degradation of the Rodney Bay image. The sight, he said, is not a nice one, which highlights the importance of having a designated spot.

Minibus operator, Francis Flavien, chimed in, saying that he has had several run-ins with the runners. He said it is a crazy sight to see the young men running across the street, racing with competitors to get to one vehicle.

This, he said, causes unnecessary traffic jams, especially when motorists indiscriminately park in the middle of the street, halting traffic flow to get their fix of coconut water.

He said: “At one time, the Gros Islet minibus drivers were blamed for the constant traffic jams. We saw it fit to organise ourselves and that’s what we did. But the problem left our operating area and now exists where the vendors are. We tried to eliminate the problem one way but then another set of hustlers came and created it another way.”