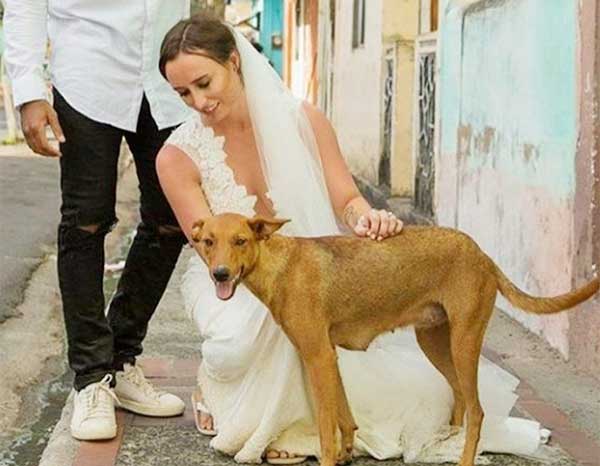 THE good work of a Canadian animal lover who has dedicated her life to protecting animals from abuse, neglect and abandonment has reached the big leagues, thanks to a stray dog, an NFL star and his animal-loving wife.

Logan Ryan, who is an American football cornerback for the Tennessee Titans of the National Football League (NFL), got married to his long-time girlfriend, Ashley Bragg, last month at the Jade Mountain Resort.

During his photo-shoot on the day after the wedding while walking in Soufriere, they came across a stray female dog that took a shine to the couple and stole their hearts.

It was at that very moment that the new Mrs. Ryan felt disheartened to see such a loving and friendly pooch roaming the streets with no one to look after it.

Wanting to help out, she asked her photographer for details on animal rescue agencies in St. Lucia and was told about HelpAWS, a Soufriere-based organisation run by Charlene Penney.

Mrs. Ryan contacted the organisation and made the decision to ask all well-wishers to gift her and her husband with monetary donations to the animal organisation rather than shower them with presents following their nuptials.

The VOICE contacted Penney, who said she was more than elated to receive the help. She said that not long after, they managed to track down the pooch, which they named Logan, and will be using the money raised to have her spayed. Penney said the rest of the money will be used to spay and neuter 10 stray cats that they recently took in.

Through Penney, The VOICE was able to dialogue with Ashley Ryan, who recounted her experience and thoughts of her trip to St. Lucia.

Ryan said: “I was warned by friends that there were stray dogs all over the place in St. Lucia, but I didn’t believe it until I saw it myself. There are stray dogs in the U.S., but it’s rare to see them by the dozen just walking past people in the streets. It was surprising and heartbreaking to see that many dogs just wandering around. When the stray approached us during our wedding photo-shoot, people seemed a little surprised that we stopped to give her attention. I never thought I’d consider us “lucky” just to have a shelter system in place in the U.S. We’re constantly working to improve that system and educate people that dogs are not meant to just live outside on their own. I’d love to help HelpAWS change the minds of St. Lucians regarding these dogs. Rather than strays, they can be loving pets and members of the family!”

When asked whether she would like to keep her philanthropic work going in St. Lucia in partnership with the local organisation, Ryan said: “St. Lucia now holds a special place in my heart. I got to marry the love of my life in this beautiful place with breathtaking views but, more so, the people we met along the way were just so good to us — they were genuine, welcoming, and kind. I know that kindness could be extended to animals as well. I would love to come back to St. Lucia to learn more about the state of animal welfare and what could be done to continue to support the mission of HelpAWS. Sensitisation of animal care and welfare is a mammoth task in St. Lucia. Thankfully, we have individuals like Charlene who dedicate their time, efforts and resources to protecting these animals. At times, the challenge may seem daunting and could easily push one over the edge.”

The Soufriere-based HelpAWS was started in 2013 and Penney said the organisation’s mission is to enrich the quality of life in Saint Lucia for both people and animals through education, providing care to stray and injured animals and controlling the companion animal population through spay and neuter.

She said: “We believe that every animal has the right to be healthy, happy, and free from abuse, neglect and cruelty. We educate and inspire communities on proper and responsible guardianship and humane treatment of all animals, we are committed to reducing the overpopulation of cats and dogs through spay and neuter programmes, we provide shelter, professional and personal care to sick, injured, abused and/or abandoned animals and we take pride in being open, honest and committed to our work.”

Anyone wishing to support the organisation or keep up-to-date with what they have been doing as well as to see all the animals currently up for adoption can do so via the website www.helpaws.com and through their Facebook page www.facebook.com/helpaws.