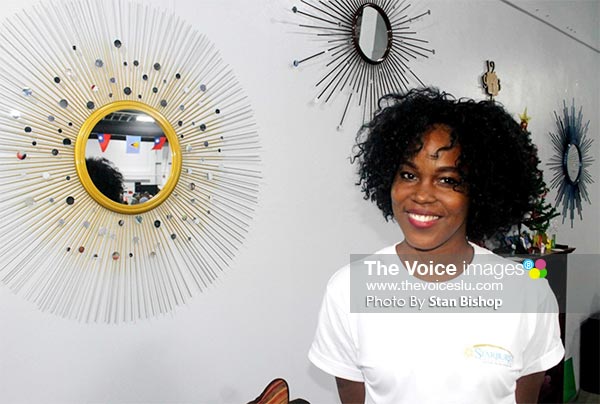 SOME entrepreneurs are lucky and smart enough to know when the right moment and idea actually gel. Sometimes that reality is actually planned. Even better, the reality comes to life through a fortuitous moment when one discovers a creative talent that remained latent.

Such was the case of Sephra Duncan, owner and designer of Starburst Productions, who fell into business accidentally nearly two years ago with what started as a hobby and has now blossomed into something bigger.

“In 2015, a friend of mine and his father were redecorating their home. They wanted something decorative to brighten the huge wall space. After chatting with them, I went online and Googled wall décor videos that showcased wall decorations, many of which were very pricey,” Duncan explained.

Duncan’s passion for the new craft eventually led her to researching how to create wall decorations such as mirrors and clocks. After creating one on her own, it seemed like everyone she showed it to loved it despite the fact that she initially made it from cardboard. Based on the positive feedback, she decided to make bigger and better magic from her ideas.

Duncan uses rods made from pine and birch woods to create the frames for her mirrors and clocks and metallic automotive sprays to add the finishing touch, admitting that most of her raw materials are expensive and also need to be imported. In some cases, one local department store makes special orders for her.

The young entrepreneur said her business was borne out of a necessity for being independent and channeling her creative passions into a business venture. After leaving secondary school, she attended Sir Arthur Lewis Community College (SALCC) before joining the workforce.

Having done Principles of Accounts all her life, she decided that whatever business she went into must have a relation with that field. She never knew, however, how different her business mode would turn out to be.

She ended up leaving her previous job to become self-employed: “It was very hard to do at first. But it literally took one person, my boyfriend, Kern, who has been very supportive in me building up my business.”

“I was always the kind of girl who wanted to be in heels an in an office – not the person to sit in a dusty workshop cutting, routing, pasting and spraying mirrors and clocks,” Duncan admitted. “But my last job was so uninspiring that I decided to form my own business.”

For now, Duncan says her target market is not the hotel and business sectors but rather the average person. She believes that she cannot afford to be pricey, especially since her business is still new. The strategy is also part of her marketing plan.

Last November, Duncan showcased her products at the Saint Lucia-Taiwan Partnership Trade Exhibition held in Rodney Bay. She seemed upbeat about her participation, admitting that she had received great feedback and words of encouragement from patrons.

“The trade exhibition was my biggest platform so far,” she tells me. “Even if my products do not get bought during the exhibition, I want people to know that my products exist.”

Her advice to any young person going through the stage in their lives where they are not sure about what to do is simple: “They need to first believe in themselves. They also need to surround themselves with supportive people who can reassure them.”