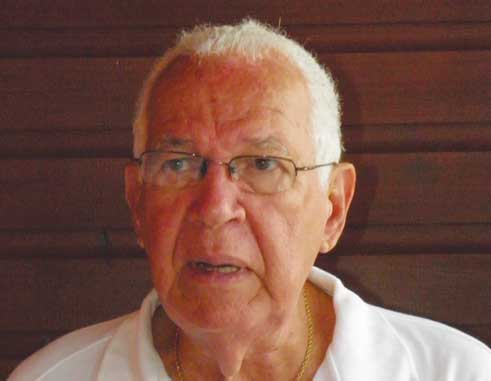 Renowned and former international cricket commentator Joseph ‘Reds’ Perreira is working with the St. Lucia Tourist Board to  seek public support for the India versus West Indies Test match at the Darren Sammy National Cricket Ground  in August.

Perreira spoke to THE VOICE about his involvement and the work done thus far for what is expected to be an exciting series. He said: “I am charged with the responsibility of trying to mobilize the nation to attend the West Indies versus India Test match at the Darren Sammy Cricket Grounds.  The dates, from what I understand are now from Tuesday 9 to Saturday 13 August.  And it’s important that we at least have a good turnout. The effort is to engage all stakeholders, all organizations, all St. Lucians to support the Test – especially if we are to get more Test matches. Everybody will be looking at the type of crowd we can attract”.

Perreira has scheduled meetings with some key organizations like the Chamber of Commerce, the Rotary Club in early July and the Lions Club.

He said: “I am working with General Manager of Massy United Faye Miller and national cricket coach in the Ministry of Youth Development and Sports Alton Crafton so the 2016 champion team St. Mary’s College and Piaye Secondary team who played in the final of the Under -19 Massy United secondary school tournament can be invited. These are players of tomorrow and should learn a lot from the Test match”.

He said Eastern Caribbean Collective For Music Rights (ECCO)  the organization that monitors the playing of music for their members has committed support while Digicel’s Public Relations personality, Louise Victor, is looking at the possibility of a 50 member “Digicel Posse” to be dressed in red and occupying some part of the stadium.

Perreira has already visited the office of the St.Lucia Civil Service Association. He said:  “They just had elections and need to settle down. I hope to address the executive in a few days’ time.  They potentially have well over 3000 members on their books.  If we can sensitize them and appeal to the membership that will be great”.

Perreira said it was unfortunate the match would start mid-week, adding that a mid-week Test match start anywhere, except Australia, England and South Africa is going to have small crowds.  “We are not going to have a full house. But what I want the world to see when the cameras show the Test match here is a decent crowd to indicate that St. Lucians have a sense of occasion and a sense of pride in coming to watch Test match between a young West Indies team and a talented Indian team at a grounds named after a St. Lucian. Once we get a good consistent turn out, I think we will prove to the West Indies Cricket Board that St. Lucia’s big onT20, yes they are big on 50 overs, but can have a decent crowd at Test matches too”.