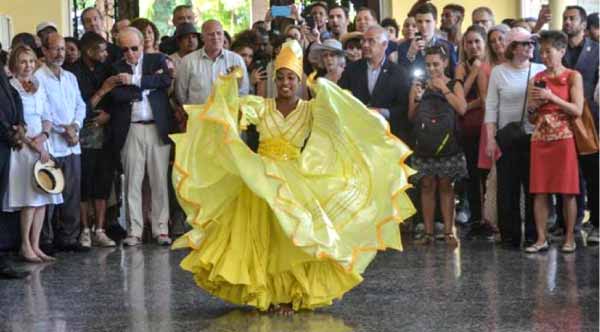 Sponsored
Share this post:
HAVANA, CUBA–The influential theatre producer Margo Lion, co-chair of the United States President’s Committee on the Arts and Humanities, described the visit on Monday by a delegation of U.S. artistes and intellectuals to the Higher Institute of Arts (ISA) as extraordinary, and highlighted the respect for artistes and creative culture that reigns in Cuba.

Speaking to the press after touring various areas of the ISA and exchanging with students from the faculties of music, dance and visual arts, Lion noted that Cuba and the U.S. could enjoy wonderful collaboration and share many opportunities for cultural development.

“It has been a huge inspiration to come to this school that trains students for free in various spheres of art. We in our country have to work to create schools like this,” he said.

The U.S. delegation, comprising over 50 members and guests of the President’s Committee on the Arts and Humanities, is visiting the island as part of efforts to strengthen cultural ties between the two countries within the process underway to reestablish relations.

Among the figures who travelled to the island as part of the large delegation were: William “Smokey” Robinson, founder and front man of the Motown vocal group the Miracles; popular producer and singer Usher; vocalist, guitarist and songwriter Dave Matthews, of rock band Dave Matthews Band; violinist Joshua Bell; actor and producer Kal Penn; co-chairman of the presidential commission, George Stevens Jr.; Puerto Rican soprano Larisa Martínez and the Artistic Director of the Miami City Ballet, Lourdes López; among other personalities.

Speaking to Granma, López highlighted the historic relations that have always existed between the ballet worlds of both countries and noted that these exchanges will be much more productive following the reestablishment of diplomatic relations.

“Alicia is a disciple of George Balanchine, just like myself, and we are both Cuban. We are both interested in the future of ballet. Right now we have many dancers in the company from Latin America, including Cubans, and I would love to bring the company here to meet the dancers of the National Ballet of Cuba, and exchange with them regarding technique. This dialogue, for me, would be very interesting as they are two companies with common elements,” she said.

Meanwhile, Rolando González Patricio, ISA Rector, welcomed the visitors on behalf of students, teachers and the Ministry of Culture, and provided them with a brief account of the history of the institution, which currently has some 3,000 undergraduate and graduate students enrolled.

“We are accustomed to receiving friends from the United States but not of such a high-calibre as yourselves,” he noted on welcoming the visitors alongside Fernando Rojas, Vice Minister of Culture, and Jeffrey DeLaurentis, Charge d’Affaires of the U.S. Embassy in Cuba.

At the end of his speech, the Rector of the institution added that “We are willing to work together to change each one of us, and to remain being ourselves, this is very important in culture and the arts in general.”

The visit by the President’s Committee on the Arts and Humanities delegation will conclude today. The programme includes tours to cultural projects, such as that of artist José Fuster in the community of Jaimanitas and the workshop of visual artist Eduardo Roca “Choco”, as well as the headquarters of the La Colmenita children’s theater group and the Litz Alfonso dance company.

The exchanges with Cuban artistes, intellectuals and officials will focus on issues related to Cuban cinema, its production, marketing, and annual events; and other specialized matters in the fields of visual and performing arts.