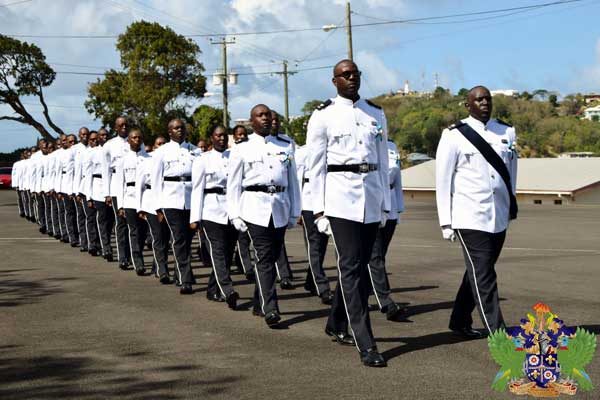 THE Royal Saint Lucia Police Training Academy turned out a class of 41 new officers last Friday. The graduation ceremony for Course 34 was held at the Academy in La Toc, Castries.

After six months of training, the graduates are now full-fledged officers. Prime Minister Kenny Anthony pointed out to the new class that their cohort was larger than the entire Police Force of Saint Lucia when it was formed in 1834. Calling law enforcement a “great and noble undertaking,” he went on to thank the former recruits for joining the force “at an exciting time.”

Said Dr. Anthony: “As with all police agencies, the core of your organisation is not equipment; it is not police buildings or firepower. No, you are the core of this organisation. You are called today to continue and build upon a legacy devoted to law and order.

“And inasmuch as you are in a disciplined force, it means that discipline must remain etched in your minds, must be a constant in all that you plan and do to execute your functions and duties. Much is demanded of you.

“You will be called to defend and protect the person, honour and integrity of our citizens.

“Your image is, therefore, priceless and cannot be taken for granted.”

The Prime Minister also took the opportunity to reiterate a call he made in 2015, at the RSLPF promotion ceremony. On that occasion, he spoke on the importance of leadership, and told officers they needed to move to more “intelligence-based policing.” Said Dr. Anthony: “Your greatest strength, your greatest weapon must be your mind, not your arm.”

The latest group of police officers is the first to be recruited exclusively from the ranks of special police constables.