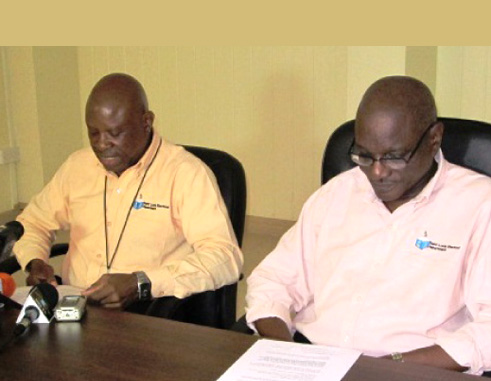 THE subject of an electronic voting system for Saint Lucia has again reared its head. However, this time around it has pitted a local company against the Electoral Department.

And while the subject was simply talked about prior to the last general elections in 2011, today a proposal has actually been presented to the Department, one which makes a case for the eradication of spoilt ballots, for the disabled to vote in secrecy and for a more than 50 percent reduction in the cost associated with the voting exercise.

However, the Department has rejected the proposal and the local company, BITbyBIT and Associates, is crying foul, stunned by the Department’s rejection of its proposal, especially since it” won the Idea of the Year “Award at the recently held Chamber of Commerce Business Awards for the same proposal it presented to the Electoral Department.

Amatus Edward, BITbyBIT Business Development Officer yesterday told The VOICE why his company was stunned by the Department’s rejection of the proposal.

“We provided the Electoral Department with the proposal for electronic voting in June of last year. Later that same year, in October, the Department wrote BITbyBIT saying it was not interested. We offered the Department a demo for viewing, it was refused. The Department did not review it. How could you reject something without first viewing it?” Edward said.

Chief Elections Officer, Gasper Jn. Baptiste and his associate Cuthbert St. Juste at a press conference last week to clarify the Department’s reasons for publishing almost 29,000 names of voters that could not be verified, attempted to justify the Department’s rejection of the proposal by saying that it presented “more questions than answers.”

Said St. Juste: “With regard to the procedure for electronic voting the Department looked at it and from our standpoint we found out that there are a lot more questions than answers and until we are satisfied that this could be an effective way for people to vote at an election in Saint Lucia we will not make that recommendation to Central Government.”

But the company is adamant that the system of voting it is proposing would benefit the entire country and falls in line with government’s push into using creativity and IT for the country’s development.

Pointing to the last general elections and the six constituencies then that were decided by margins lower than the pool of rejected ballots, the company noted that when compared to the use of the stamp, another voting system that was contemplated for use at the last general elections but was never taken to parliament for approval, its electronic system proposal outranked all other systems under consideration.

“Our system is the only one available to the government that would make every vote count,” Edward said.

He added that unlike other systems like the stamp that would require personnel to be trained in its use, the system proposed by BITbyBIT does not require anyone to be trained. That system has already received the nod from the Blind Welfare Association and the National Council for Disabled Persons, according to Edward. The company will be demonstrating the system to the Civil Service Association today and tomorrow at the latter’s headquarters in Sans Soucis.

The Department has advocated the use of the stamp in the voting process to the extent that it has made recommendations to the government for its use in the coming general elections. It is now a matter for the country’s parliament to decide whether to accept or reject it.

“We have made representation to the government with regard to the use of the stamp. We are hoping that very soon that would be tabled and we would get the ok to use the stamp. Until then we cannot speak and say definitely that in the coming elections we will use the stamp,” Jn Baptiste said.

But BITbyBIT maintains that the stamp is not the best system under consideration right now noting “that the stamp will still cause rejected ballots.”

The Department last month published 28,127 names of electors it said it could not verify on the Voters List.

This drew the angst of the opposition United Workers Party which called on the Department not to remove the names of electors from the Voters List.

Jn Baptiste said that the list was published simply because the Department wanted to know the whereabouts of those persons.

“We wanted to know where those persons are,” he said.

So far 640 persons whose names were on the verification list have come forward and verified themselves.