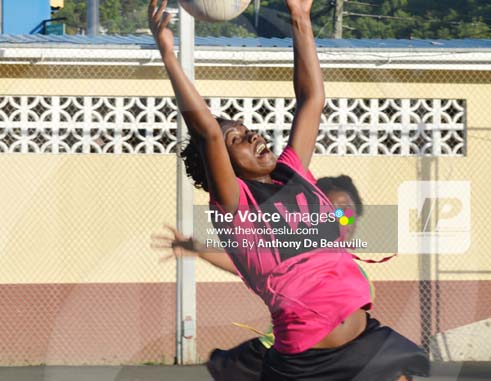 THE Independence Netball Classic continued this past weekend with five matches played at two venues.

At the Vigie Multi-Purpose Sports Complex there were wins for Anse la Raye, N.V Ballers, Mabouya Valley and Desruisseaux, while in Canaries the home team won over Shamrock.

For S.J.C Egrets Lien Moise netted 9 from 11 attempts, MalikaDestang scored 7 from 8 attempts and Mikale Daniel had 5 from 6 attempts.

In the second encounter also from Division three – N. V. Ballers defeated Shamrock 30 -27 in a keenly contested match up. N. V. Ballers led the first quarter 8 – 6 but, it was all even in the second quarter 14 -14. In the third quarter Shamrock nosed ahead at the end 22 – 19, but were not able to hold onto their advantage and eventually lost to N.V. Ballers 30 – 27.

In the Third encounter in Division Three, Mabouya Valley defeated Entrepot 32 -18. The score line does not reflex how well the two teams played throughout the match. At the end of the first quarter they were locked at 8 -8, but Mabouya Valley with a strong following took charge of the remaining quarters as they led 16 – 9 ; 21 – 15 and final score 32 – 18.

On the west coast in the fifth and final encounter played in Division One, Canaries playing with home court advantage and their crowd support behind them defeated the former national champions Shamrock 31 – 27. At the end of the first quarter Canaries led 9 – 6 but Shamrock fought back to lead the second quarter 16 -14 Canaries was not daunted, neither threatened by the two points deficit and with determination and perseverance the girls from the western village went on to regain the lead at the end of the third quarter 22 -20, finally winning the encounter.

For Canaries ChennaProspere netted 22 from 35 and Shenelle Francis scored 9 from 17 attempts.

Jacqueline Remy netted 3 from 4 attempts; Alexandrina Eugene scored 9 from 20 and Enalie John 15 from 25 attempts for Shamrock.