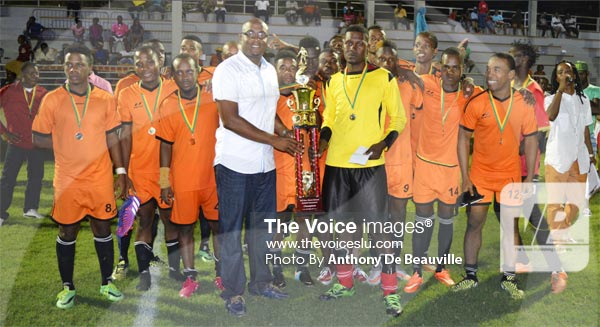 A record number of football enthusiasts converged on the La Ressource Playing Field in a kaleidoscope of colours last Sunday to witness Survivals triumph over Aux Lyon United in an epic football final.

At the end of regulation time, the scores were locked at nil all sending the match into extra time when Survivals scored the clincher

But before the actual showpiece on the square the official recommissioning of the facility and the switching on of the lights courtesy of the Taiwanese government, took place in the presence of a number of dignitaries including Minister in the Embassy of the Republic of China on Taiwan Odi Sun.

The match was keenly contested with both teams showing just why they were regarded as the best in the Mabouya Valley community. The huge and vociferous crowd that came out to support the teams was treated to an evening of very competitive football as the tension thickened with every passing minute.

Although both teams created scoring chances the goalkeepers foiled their attempts on every occasion as both clubs boasted keepers who held their own between the uprights.

It became clear that it would take something special or an error by either team to break the deadlock. Unfortunately, the 90 minutes of play produced neither and with the score being goalless at the final whistle, the championship went into extra time.

With all eyes towards the playing surface now beautifully lit, Survivals held their nerves to win 1 – 0 a goal courtesy No.14 Kentus Brown to hoist the championship trophy in the third edition of the Shawn Edward competition.

Aux Lyons United Wayne Theodule was adjudicated MVP of the finals and player with the most goals.

In the third place playoff the day before Togetherness Youth defeated Chesters 4 – 2 in a penalty shoot out after the scores were locked at 1 – 1 after regulation time.