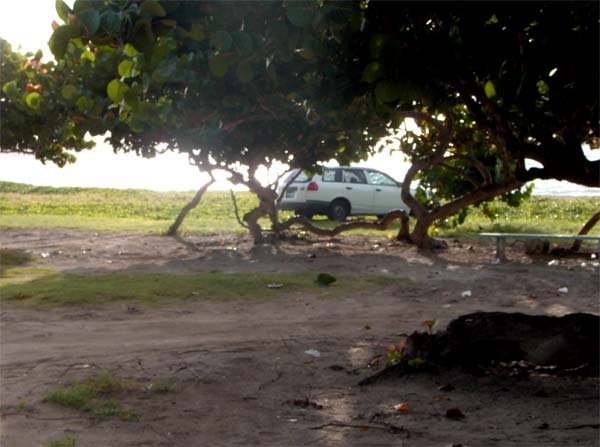 THE damage which is being done to the ecosystem along Sandy Beach, a part of the Pointe Sable Environmental Protection Area in Vieux Fort is of grave concern to the St. Lucia National Trust.

Programme Officer of the Trust, Craig Henry told The VOICE that the problem is caused by a lot of vehicular traffic on the beach front.

“We are very concerned about Sandy Beach…We have observed that there is enormous traffic on the beach front and it is creating an issue for us, by causing a lot of compartments on its surface. This affects the roots of the trees, the scenic beauty of the area and turtle nesting on the beach,” Henry said.

He added that the vegetation on the beach front is very useful to beach users by providing them with shade.

Sandy Beach where several business houses are located, is also the venue for a variety of social activities.

According to Henry, recently there has been some cleaning at the beach front, but while this is being done, more vehicles are encroaching onto the area which is being protected for the environment.

“The problem it will create is that it causes more tracks at the beach front, hence exacerbates the problem. It will not only destroy the vegetation, but also leads to coastal erosion,” he said.

Henry said the problem can be solved by beach users parking their vehicles in other areas and walking to the beach.

According to him, the Trust has had discussions with the Vieux Fort South Constituency Council and the National Conservative Authority (NCA) on the matter, and is hoping that they will be able to come up with a solution. He added that in the meantime the Trust would not like the problem to exacerbate and reach a point where it will be more costly to address.

He called on the Vieux Fort South Constituency Council not to open any spaces at the beach front while cleaning the area, so drivers will not be encouraged to drive into it and create more problems for the Trust.

“We have already seen such effects on other parts of the beach,” he lamented.

He said there is a plan for the zoning of the Sandy Beach area, which will assist in dealing with the problem.

“We have had some consultations and some schematic proposals were made in terms on how the zoning should be done. We have to put that plan in place so we can save Sandy Beach, not only for us, but for future generations,” Henry said.

He said the issue may be one which requires the intervention of the police, since there should not be vehicular traffic on the beach.

The maintenance of the beach is a collaborative effort between the Vieux Fort South Constituency Council, the National Conservative Authority, the forestry department and the NICE project.